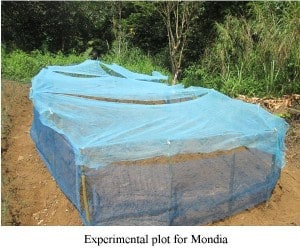 The plant was recently identified as been of potential value to flavor and food industries by V. Mane Fils Company.

Last April 2016, the Mutually Agreed Terms (MAT) was signed permitting ERuDeF and its partners to carry out research on the plant. While researching on the potentials of the roots of this plant species to the flavor and food industries, ERuDeF last May, 2016 embarked on agronomic studies in the project site in Lewoh to understand best sustainable domestication methods for the plant.

The Access and Benefit Sharing (ABS) Project Coordinator, Ms.Kenmene Alida explains how the agronomic studies are being carried out:

Besides the agronomic studies, regeneration measures are being undertaking by ERuDeF.

[/one_half]“We are also trying to regenerate the plant in order to restore its abundance onsite. Some 20 Lewoh farmers have developed an agroforests of about 3500 cuttings stems and seeds of Mondia whitei. This is of utmost importance considering the fact that the species is almost going extinct due to human pressure on the resource for multiple purposes”Madam Alida said

She noted that the results of the agronomic studies will be communicated at the end of the studies and the people of Lewoh trained on the best regeneration method.

Mondia whitei is the second plant of interest to V Mane Fils Company in the Lebialem Division. The first was the Echinops giganteus, with help of ERuDeF and French Charity, Man and Nature; the plant was located in Magha-Bamumbu in the Wabane Subdivision in 2012. This plant, which has passed through the same process like Mondia, is now at the commercial stage.