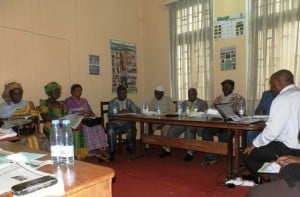 [/one_third]The ERuDeF (Environment and Rural Development Foundation) has begun revving up her interventions to drive her dream of becoming the leading conservation NGO in Africa.

“We want ERuDeF in ten years to become one of the best five conservation NGOs in Africa,” said Louis Nkmebi, President/CEO of ERuDeF, during the NGO’s Board of Trustees annual general meeting that held in Buea on June 27, 2015.

Nkembi said to achieve this dream, ERuDeF is expanding its conservation interventions to cover the rest of the country.

“Infrastructure-wise, ERuDeF anticipates establishing new offices in Yaounde and Maroua. The office in Menji would serve Manyu, West and Northwest Regions, and the office in Buea will serve the rest of the Southwest and Littoral Regions,” Nkembi said. He added, “In terms of governance, we anticipate the recruitment of some 200 personnel to spread out research and conservation operations nationwide.”

Currently ERuDeF is active in four regions: Southwest, Northwest, West and Littoral, where some 1.5 million trees have been planted into farmers’ fields under the organization’s reforestation and agro-forestry programmes.

Despite an inclement budget climate and resistance from communities, ERuDeF has recorded enviable successes in her efforts to conserve endangered wildlife species and fragile ecosystems in the four regions where it operates.

ERuDeF’s work in Lebialem has probably been the most enduring contribution to the Division with the creation of a wildlife sanctuary called the Tofala Hill Wildlife Sanctuary.

“In love with the wildlife of the region and ERuDeF CEO presents strategic plan to expand conservation nationwideconcerned about their decreasing numbers, we also launched the creation of the Mak-Betchou Sanctuary,” Nkembi said, adding, “with a current staff strength of 30 senior employees, 25 field technicians and 4 associate staff we are launching a very ambitious plan of expansion in the country.”

The ERuDeF CEO said they are now fighting for a corridor for the movement of elephants from Mak-Betchou to Korup National Park in Ndian Division and possibly to the Mt. Cameroon National Park in Fako Division. He added that ERuDeF will not forever remain in Lebialem Division but needs to expand beyond the Division.

In this light, he said in 2013, the organisation engaged in the Deng Deng National Park in the East Region, where animals like the Western Lowland gorillas and hippos are found, and intends to extend its interventions to the following areas: The South to cover the TRIDOM – Congo Brazzaville, Central African Republic and Cameroon; the Kimbi-Fungom National Park in the Northwest of Cameroon with the possibility of creating a trans-territorial conservation strategy with Nigeria; Oceans in the Southwest Region – to develop a mangrove programme, which would lead to a marine park in Ndongere and Mt. Nlonako in the West Region which harbours the world’s largest frog species and has the highest density of reptiles.

Currently some students are carrying out research in this area that would inform ERuDeF’s next plan of action.

Nkembi said although Mt. Bamboutos in the West Region is not very unique, ecologically, however, it provides 30% of the water needs of Cameroon; it is the source of water for Foumbam, Bafoussam, Menji and Mamfe.

In view of extending its conservation interventions to cover the rest of Cameroon, ERuDeF anticipates the following in terms of infrastructure and governance: Recruitment of some 200 personnel; establishment of an office in Yaounde, Maroua – the office in Menji would serve Manyu, West and Northwest Regions and the office in Buea would serve the rest of the Southwest and Littoral Regions.

In the line of business, the ERuDeF CEO said a company called Silverback was created under the Social Business Division of the organisation to generate profits which would be ploughed back into conservation. He said this requires sourcing for international partners. In addition, those involved in the business would be entitled to bonuses.

Board members Nkembi concluded by restating that ERuDeF having evolved all the way from 1999 to 2015, to go beyond 2025, it will have to begin to build for that task.

Responding to Nkembi’s speech, the Chairman of the ERuDeF Board of Trustees, Eric Akemnda, lauded the successes of ERuDeF and further inroads it is making into conservation. Administrative bottlenecks notwithstanding, Akemnda said there is need for steady staff to manage the organisation continuously.

He encouraged the CEO and his staff to move ahead.