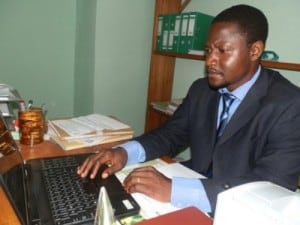 The Institute of Biodiversity and Non-profit Studies (IBiNs), a project of the Environment and Rural Development Foundation (ERuDeF) now has a new Program Coordinator. Shey Aloysious Sah takes over from Emmanuel Sigalla who goes to pursue a Ph.D in Fisheries in the University of Buea. Shey Aloysius assumed duty on May 25, 2013, after a hand over meeting that took place at the Institute’s Campus.

Mr. Shey Aloysius holds a B.Sc in Chemistry and Material Sciences and a Post-graduate Diploma in Certified Public Secretary. This young Cameroonian has been working as a Secondary School Principal for the last 7 years. He has meticulously nurtured 3 schools from infancy to maturity. These schools include the St Pius College Ekondo-Titi which he developed a curriculum and moulded it from scratch in 2003. He then moved over to St. Therese International Bilingual Comprehensive College and Fomic Comprehensive High School in Buea. Speaking shortly after his appointment, the 33-year-old was happy to take up this new responsibility as Program Coordinator of the baby Institute which is just a year old.” I greatly appreciate this new task that has been entrusted on me. I want to especially thank the brains which came up with the unique idea of an Institution to groom leaders in Environmental management and Conservation”. Sounding very optimistic, the new Program Officer described his coming to IBiNs as timely given that the Institute would give him the opportunity to exercise once more his ability of nurturing new institutions. “This happens to be the fourth Institution I would be grooming. I find myself just in the right position with the right tool to be able to manage the affairs of the Institute” Mr. Shey went on. The father of two explained that it is actually an exciting responsibility given that he has particular love for nature and anything related to its protection.

He acknowledged that IBiNS is slightly different from the type of schools he has worked with but was confident that just like any other new school, there is need for effective planning and implementation. His strategy for the start will be effective planning and massive publicity for the programs, in order to recruit and train many more young people.

Mr. Shey said that one of his immediate responsibilities would be to put in place an effective student follow up program especially given that the program is more professional with 70% of the work being practical and 30% theory. “We need an effective

coordination to neat all in one system so that there are no lapses. There is also a need for systematic development of a programme to suit the learners” Mr. Shey concluded.