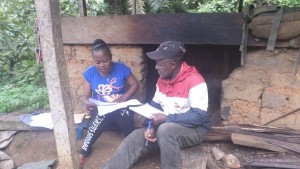 [/one_third]Atingtang Bernard, a new ranger selected by the Fossungu Village Forest Management Committee, has been fully equipped intellectually to take up his new role. This was during two weeks of intensive training on surveillance and bio-monitoring facilitated by the Environment and Rural Development Foundation (ERuDeF). The training carried out in the Fossungu flank of the Tofala Wildlife Sanctuary, took place in October, 2017.

According to ERuDeF’s Biologist and Wildlife Research Officer,Gwendoline Angwa, the new ranger was trained on the basics of Global Positioning System (GPS) and data collection processes. To her, information acquired from the Fossungu flank of the Sanctuary will greatly facilitate a broad-based analysis of activities in the, hence, integrated in the Management Plan.

“He was trained on various aspects on bio-monitoring and surveillance, using GPS and other gadgets. He also undertook some training on data collection. His activities around this flank of Tofala, will enable us to have information on the specie distribution and human encroachment in the entire sanctuary. The information will be integrated in to the Management Plan of the Sanctuary,” Gwendoline indicated.

The training lasted for eight days with an additional 5 days for a test period. From the test evaluation, the ranger fully took his lessons well.

“His ability to manipulate the GPS and cyber tracker machines, coupled with his surveillances prowess, proved he was on track to becoming a qualified ranger in Tofala,” the trainer said.

On his part, the new ranger testified that he received the trainings in humility, and will be able to put to practice, all that he acquired. He indicated that he shall be rigorous in the Fossungu flank of Tofala so all the encroached parts of the sanctuary will be identified and reported.

“This knowledge I have acquired here is very important. Using the GPS to track and measure the size of an area is so great. I therefore shall immediately get to work to survey all the boundaries around this flank. All encroached areas of the sanctuary shall be reported in my data,” said Mr Bernard.

It should be noted that much of the Fossungu flank of the sanctuary has been converted to farmlands. It is against this backdrop that a ranger was employed and assigned to survey the area. Large groups of the endangered Preuss’ monkey were encountered on several occasions. This species were mostly seen in small forest fragment between the farmlands.