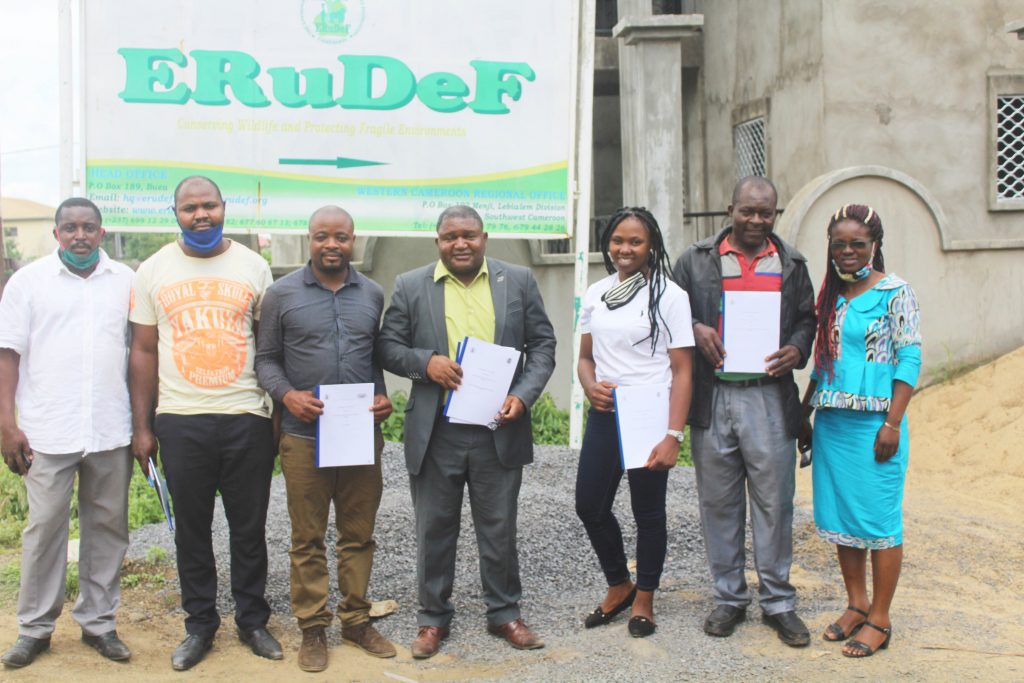 The environment and Rural Development Foundation has signed a memorandum of understanding (MoU) with Dynamic Eco sustainable and Development Association, DESDA, a local organization based in Bamenda and Protection de L’Environment et Development de L’Elevage en Milieu Rural, PEDER based in Mbouda. The signing of the MoU came after intense discussions that lasted for two days between the chief executive officers of DESDA, Mme. Foncham Linda and her team, Mr. Tazo Jean Bosco, the chief executive officer of PEDER on the hand and the president/CEO of ERuDeF, Louis Nkembi and his own team on the other hand.  The signing of the MoU took place at the headquarters of ERuDeF in Buea, Friday May 15 2020.

During discussions that culminated to the signing of the MoU, the President/CEO of ERuDeF schooled the CEOs of PEDER and DESDA about the Mount Bamboutos Initiative and expressed his willingness to build their capacities in areas which they may lack such capacities. He also assured them that ERuDeF will work with them for as long as they deliver. For us to succeed, the CEO of ERuDeF continued, “…we must have a shared vision, the vision of restoring the ecosystem functions of the Mount Bamboutos”

The Midterm review of the Mount Bamboutos Initiative was also presented to enable the new partners understand the state of the project. Lapses of the first two years of the project were discussed. The incoming organizations are expected to close such lapses before the last year of the current funding elapses. Louis Nkembi, just like the MBI project manager, Mr. Asabaimbi Deh Nji stressed that these organizations must be on the field all the times so as to ensure the smooth running of the activities of the project wherever they are based.

DESDA that has as vision empowering indigenous and grassroots women/girl while ensuring a sustainable environment and restoration of the ecosystem will be working in Pinyin, Menka and Buchi, Santa sub-division, Mezam Division, Northwest region of Cameroon. It should be noted that the MBI project has as one of its objectives, empowering women and girls. DESDA is therefore a square peck in a square hole and her involvement and relevance in the project can not be over emphasized.

PEDER on other hand will be working in the Bamboutos Division of the West Region precisely in Babadjou and Bangang villages. PEDER’S main objective is protecting the environment and developing rural communities, which falls in line with  the objectives of the MBI- sustainable livelihoods and ecosystem restoration.

Worthy of note was the presence the CEO of Green Impact (GI), AWOUNANG Michel.  GI is a local organization based in Dschang that joint the the MBI project in May 2019. AWOUNANG Michel renewed commitments with ERuDeF in restoring the ecosystem functions of the Mount Bamboutos even before the 15 years that the MBI project is expected to last. GI has been working in the Menoua Division precisely Bafou village since last year when she joined the project.

The CEO of DESDA, likewise that of GI and PEDER expressed their gratitude to ERuDeF for giving them the great opportunity of being part of the MBI project that will not only restore the ecosystem functions of the Mt. Bamboutos but also change thousands of lives. The President/CEO of ERuDeF also thanked them for having confidence in ERuDeF and expressed his willingness to renew the present MoU (that expires in March 2021) for as many times as possible so long as they respect the terms of the current MoU till it expires.

The Mount Bamboutos Initiative (MBI) is a joint initiative developed by ERuDeF and ITF in partnership with the government of Cameroon that aims to restore the biodiversity and ecosystem functions of the degraded Mount Bamboutos landscape while securing the livelihoods of local and indigenous population. Specifically, the project aims to restore 35,000 hectares of the degraded landscape through the planting of 15 million agroforestry and indigenous tree species to secure the livelihoods of over 30,000 people, for 15 years. Due to anthropogenic activities such as poaching, deforestation, bush fires, poor farming practices and urbanization, the Mount Bamboutos landscape has been severely degraded.  Therefore, ERuDeF has taken various steps to salvage the landscape with objectives in relation to governance, livelihoods development, biodiversity, forest landscape restoration, biodiversity, research and development and sustainable finance.