Discover Cameroon’s Endemic Zebrawood at the Mercy of Wanton Exploiters 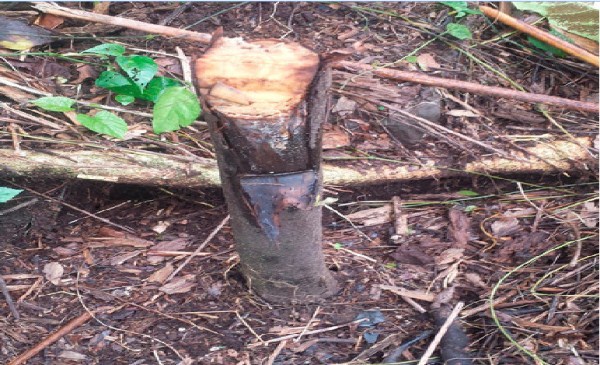 Zebrawood (Microberlinia bisulcata A. Chev) is a tropical rainforest tree species commercialized under the name Zingana. It belongs to the sub-family Fabaceae and family of Leguminiceae of the Order Fabales. The species  is a critically endangered  (IUCN Red list) with occurrence limited to the  Mt. Cameroon National Park. The hard wood is basically brown to white or grey with dark brown streaks (with density   ranges of 0.65–0.73 g/cm³) that gives a beautiful design like stripes of a zebra. Hence, it is commonly called zebra wood (or tiger wood). The species is highly cherished for its decorative wood especially in the international markets.

In its capacity as the largest (in terms of size and canopy) amongst other wild species, Microberlinia contributes massively to the integrity of the entire ecosystem.  It also contributes significantly to ecosystem health by supporting soil nutrient cycling (especially phosphorus in phosphorus poor soils) through its ecto- mycorrhizal association with soil fungi. Being member of the pea family (Leguminiceae), Microberlinia improves the soil nutrients of the entire ecosystem through its interaction with the nitrogen fixing bacteria it posses at its root nodules. These features also account for the heavy fruiting feature of the tree and survival of other biological species in that environment.

Unfortunately the species is now at the mercy of wanton exploiters. The wanton exploitation of Zebrawood took a different twist in 2012 when the Chinese market diverted its interest towards the species following the suspension of Guiburtia tesmannii (Bubinga) exploitation. With the new found interest in the species and increasing demands from the Chinese Market, timber exploiters in general and those from Douala in particular resorting to sponsoring wanton illegal exploitation of Zingana in the Mount Cameroon area, through local authorities. The pressure on this endemic and threatened species has been compounded by population expansion and the ever increasing encroachment into the forest for agricultural purposes.  Also, the species is characterized by low mortality rate of adults which has a trade-off effect to the detriment of wildlings. In the midst of this, there seem to be very limited conservation attention towards this species.

With support from  Fauna and Flora International (FFI) in 2011 and Mohamed bin Zayed Species Conservation Fund (MBZ) in 2015, the Environment and Rural Development Foundation(ERuDeF), engaged in restoring the population of wanton exploited Microberlinia species through independent actions of local institutions. This intervention culminated in the restoration of some 20,000 microberlinia bisulcata species in the Mount Cameroon Area. In addition, ERuDeF supported the South West Regional Delegation of Forestry and Wildlife (RDFW-SW) to embarked on a relentless fight against these illegal activities through sensitization, collaborative management and repressive measures where appropriate.

These efforts proved restoring the species but did not handle the aspect of agricultural land scarcity for poor resource farmers. There is therefore an urgent need for community needs to be properly addressed for the future survival of this endemic and threatened tree species.