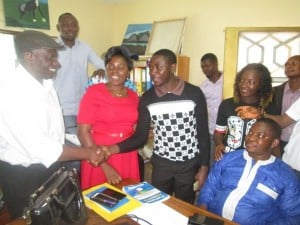 Staff of the Environment and Rural Development Foundation (ERuDeF) have elected their pioneer staff delegate, Bertrand Shancho Ndimuh. He emerged victorious after a transparent and hitch free election conducted April 7, 2017, at the organisation’s Malingo branch office.

In a highly contested election with 3 aspirants for the position of staff delegate, Bertrand Shancho Ndimuh emerged victorious grabbing 19 of the 28 available votes.

In his acceptance speech, the staff delegate elect said, he is humbled to have been chosen by majority of the staff. He indicated that he shall be working with everyone for the betterment of the organisation

“I thank my fellow colleagues for entrusting me with such great responsibility and I plead that we all take our various tasks seriously. I also pledge to make sure all staff get what is due them and same with the administration so that at the end of the day, both staff and administration are satisfied as this will help the organization grow to higher heights,” Bertrand Shancho intimated.

He pledged to allocate suggestion boxes in each of ERuDeF’s offices so staff can deposit their queries or worries. He promised to make sure all worries raised by staff will be given appropriate intervention.

Bertrand Shancho Ndimuh besides his new position, serves as the Head of Communication at ERuDeF, and the Editor-in-Chief of the Green Vision Newspaper. He is also the Public Relations officer of ERuDeF Institute of Biodiversity and Non-Profit Studies.

Conceding defeat, one of the contestants, Yanick Fonki, indicated that even though he is shocked by the overwhelming defeat, he is ready to work with the winner. He added that in an election, there can be only a single winner, reason why he conceded defeat and throws weight behind Bertrand Shancho.

“Though disappointed and shocked that my own people did not vote for me, all my support goes to Bertrand. I believe he has the potentials of driving the interest of each and every staff of this Organisation to another level. I shall propose all those goals I indicated in my manifesto to him. If he buys them, we would work together to implement,” Yanick Fonki said.

Accepting the newly elected and pioneer Staff Delegate at ERuDeF, the Senior Director of Administrations and Human Resources, Charles Tangie, said the importance of a staff delegate in the organisation cannot be over-emphasized. He called on the newly elected to get to work immediately and under-study the various interest of each staff so he can better represent them. According to the Human Resources Director, the new staff delegate will be fully installed by the Delegation of Labour sometime in 2018. He promised to accompany the new staff delegate to the Delegation of Labour and Social Security, so he could be properly drilled on his functions.

For her part, the Chief Operating Officer (COO) of ERuDeF, Ursula Nkeng, said ERuDeF priding itself as the leading conservation NGO in Cameroon and Africa, cannot be indifferent in the procedure of respecting the rights and social security of its workers. She indicated that the management of the Organisation shall provide the level ground for the new staff delegate to perform his duty.

The solemn occasion wrapped up with all present promising to work together for the betterment of ERuDeF.