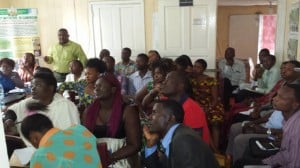 The Chief Executive Officer of Cameroon’s leading conservation non-profit organization, the Environment and Rural Development Foundation (ERuDeF), Mr. Louis Nkembi, has made known the 2017 plan of action of his organization.

Speaking during the ERuDeF Annual Review and Planning Meeting, which took place recently at the organisation’s head office in Buea, the President/CEO said besides increasing the competitiveness of ERuDeF in Cameroon as the leading conservation non-profit organization, and increasing/maintaining a more competitive human resource, ERuDeF will be increasing and consolidating her visibility in Europe and North America in 2017.

The organization according to Mr. Nkembi, will increasing her influence and mobility in the Central African Sub-region. He said the achievement of such goals can only be achieved through a relentless commitment to hard work and a constant monitoring and control of all organizations’ activities in close collaboration with his solid administration.

“2016 has been a great year. We launched the first ever Participatory 3D model in Cameroon in our Tofala Mone East corridor project, facilitated the signing of the second Mutually Agreed Terms (MAT) in Cameroon and Francophone Africa and finialised ground works for the launching of the ERuDeF UK branch and raised incomes of households by over 12millioncfa in the lebialem area. Our interventions in the field have touched the lives of over 5000 students in 50 schools with over 3.6 million trees planted through the agroforestry systems. Meanwhile the Tofala mone corridor project was consolidated through the creation of a series of community forests and upgrading of a management plan of the fmu11002. These and a host of others were recorded as success stories in the year 2016” Mr. Nkembi expounded.

He attributed these achievements “his close collaborators in his world of conservation” that is partners and funders like Tusk Trust, Fauna and Flora International, African Conservation Foundation, Man and Nature, Trees For The Future, Rainforest Trust, ICRAF, Biolab Foundation, MBZ and many others.

Though a successful year, the President/CEO said resistance from some forest adjacent communities to conservation difficulties remain a major nightmare to the organization.

Mr. Nkembi implored lovers of nature and sympathizers of great apes nationally and internationally to join forces with ERuDeF in the conservation of threatened biodiversity species, restoration of fragile ecosystems and the fight against climate change so that the environment will in return ‘protect us’.

He assured prospective funders that their support to the organization, will greatly contribute to saving the last globally threatened biodiversity species and their habitats in Cameroon given that ERuDeF is the leading and most competitive national and soon to be international conservation organisation in Cameroon with core competences in the holistic application of conservation approaches.