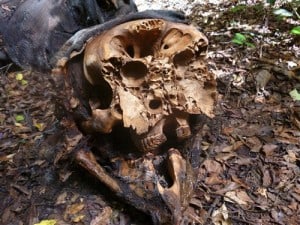 [/one_third]The remains of a visibly matured elephant, has yet again been found in the proposed Mak-Betchou Wildlife Sanctuary. The elephant’s carcass was discovered, Monday May 15 2017, by local rangers during a monthly forest surveillance and patrol mission, conducted around the proposed protected area. The remains were found around the southern eastern part between Essoh-Attah and Njoagwi. The dead elephant was discovered without its tusks.

The carcass of another elephant was discovered in the north of the proposed Mak-Betchou Wildlife Sanctuary sometime in 2014. Though incident was reported to the Lebialem Divisional Delegation of Forestry and Wildlife, nobody was napped for the act.

The rangers who discovered this new dead case, indicated that their attention was driven by a pungent odour emanating from a corner of the forest.

“We were walking in the forest recording signs of chimpanzee, other mammals and human activities when suddenly we got a rotten smell. When we got to where this overbearing smell was coming from, we found a large mammal on the ground, it was an elephant without its tusk. We can’t ascertain with certainty who must have committed that act. However, we highly suspect poachers who come from Nguti, and the West Region,” Mr. Forbang Timothy, the lead ranger narrated.

The proposed Mak-Betchou Wildlife Sanctuary is not formally protected, which makes it vulnerable to illegal activities like poaching and forest encroachment.

Thanks to the financial support from the Rainforest Forest Trust, the Environment and Rural Development Foundation (ERuDeF) has recruited six local rangers who are involved in forest surveillance and patrol in the proposed Wildlife Sanctuary. This activity facilitates information gathering on the health of the wildlife species and their habitat. The information gathered are used by managers to assess the changes in wildlife population and their habitat within time and space.

The proposed Mak-Betchou Wildlife Sanctuary is located in the south of Lebialem Division and forms part of the Lebialem Highlands Conservation Complex. It is situated between longitudes 586000 – 596000 m east and latitudes 598000 – 606000m north. It is the safest area for many African elephants (Loxodonta Africana cyclotis) in the Southwest forest-savannah transitional zone towards the West Region.

The long-term protection of the African Forest elephant can only be assured by the gazettement and development of the management implementation plan of the proposed Mak-Betchou Wildlife Sanctuary.