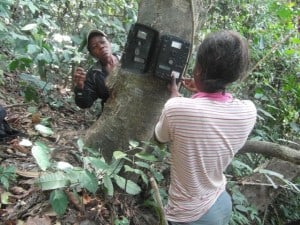 Biological staff from the Environment and Rural Development Foundation (ERuDeF) have received a two-day training on the collection and assembling of great apes data in the Forest from a wildlife Expert from the Virginia Tech University. The Expert, Michael st Germain who is the Biological Project Supervisor of Virginia Polytechnic Institute gave the training during his visit to the Lebialem Highlands SW Cameroon, from January 9th to January 15th 2014.

Michael, passionate about conservation could not withhold anything until he was sure that the biological team of ERuDeF had acquired enough skills that would permit them collect more quality data, summarize it more properly to bring out key indicators that would inform stakeholders and policy makers and also share their findings with the rest of the science world. Michael worked with Allen, Bedwin (staff of ERuDeF) and Grace (a trainee from the Institute of Biodiversity and Nonprofit studies IBiNS). Following an overview of ERuDeF’s conservation activities in the Lebialem-Mone landscape presented by Asoh Bedwin, Michael was excited to learn how far ERuDeF has gone even with the limited resources at her disposal.

During the working session with the biological team, Michael taught them on the various methods of data management, setting up of camera traps and data management from the cameras. After this working session, Michael and the team went to the proposed Tofala Hill Wildlife Sanctuary where they planted four cameras for a test phase using opportunistic spot added to the field guide’s knowledge of frequently used trail. After three days in the field, Michael returned with an increased joy and new ideas of pushing the cooperation between his university and ERuDeF’s Institute of Biodiversity and Nonprofit Studies (IBiNS).

Reacting to the training, one of the Biological staff, Asoh Bedwin said “I feel privileged to have been a part of this training and I really want to thank Michael for taking out time to build our capacity. During our regular biomonitoring, we have on several occasions sighted the elusive Cross River Gorillas but have hardly been able to capture them in our cameras. With this training and the installation of the cameras in the forest, I believe we would have more quality data”. She said.

It would be noted that it is thanks to increased cooperation ties between US Charity Trees for the Future Cameroon and ERuDeF, that the biological team of ERuDeF benefited from this capacity building. Michael st Germain accompanied The Cameroon Program Desk Coordinator of Trees for the Future and a Professor from Virginia Tech doing research on agroforestry-John Munsell during the last visit to Cameroon in January 2014 to evaluate Trees for the Future’s activities in Cameroon.