Farmer Cashes In With Acacia… 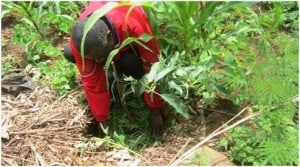 A farmer, Njeukeng Joseph, has been reaping the fruits of agro-forestry trees since 2010 when he rose from nothing to over 30,000 trees of Acacia, Leucaena, Neem, and Prunus.

“I save over 30,000 francs cfa a year that I would have spend to purchase fuel wood,” says Njeukeng, one of ERuDeF’s oldest field technicians based in Menoua Division, West Region of Cameroon.

The farmer says he uses the agro-forest trees as fertilizer, fuel wood, pegs and medicinal purposes.

Njeukeng has also developed a new technique to raise grafted seedlings. In 2012, he discovered that stuffing the leaves of Acacia and Leucaena in a transplanting hole is more effective than just spreading the leaves on a larger portion of land, where some would be carried away by wind or water.

“This is what I have been doing each time I am planting any beneficial tree,” says Njeukeng, as he demonstrates how he fits the leaves of the trees in the hole after placing the grafted tree before covering the grown for quick and effective reaction.

“Agro-forestry has put a smile on my face and that of my household,” Njeukeng says with a smile. He encourages other farmers in his Division to follow suit and change their lives.

He has promised extend his new experiences to other farmers practising agro-forestry.

Meanwhile, in June 2015, TREES Cameroon distributed 68 grafted fruit trees and some farm equipment to farmers in the West and Littoral Regions as a sign of encouragement.

Farmers whose projects scored high on the evaluation board received grafted the trees and farm equipment.