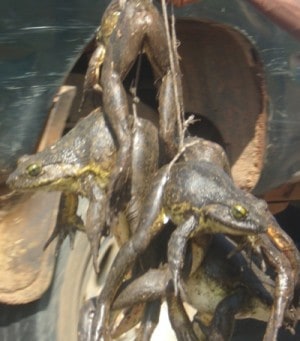 A diehard hunter of the Goliath frog, known locally in Cameroon as mukongoh, has said he and other hunters would stop hunting the rare amphibian if government could provide them with an alternative source of livelihood.

“The only way to stop us from catching this frog is for the government to provide us with alternative source of livelihood because it is from this hunting that we send our children to school and also feed our families,” says Andrew (not real names).

According to the frog hunter, he started hunting in 2001 when he just moved to the village (Magamba) in the Mt. Nlonako area, Mungo Division, in Littoral Region.

“I was solely dependent on hunting mukongoh. We hunt them at night, walking about 30 to 40 km along the banks of the river. Each night I can sight 20 to 30 mukongoh, out of which I am able to catch only about 5 to 10 per night,” Andrew recounts.

He, however, said they are witnessing a decrease in the population of the frogs.

“Today, in one night, catching 3 to 5 big mukongoh is near impossible,” says Andrew.

The Goliath frog is the world’s biggest frog, found only in Cameroon and Equatorial Guinea. In Cameroon, the frog is found at Mt. Nlonako. They suffer from many threats including habitat destruction and indiscriminate hunting by villagers for food and commercialization.