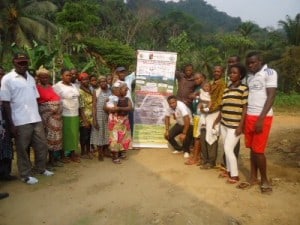 [/one_third]Mass scale Cassava production, Piggery farming, Palm oil production, Poultry and apiculture farming, are five agriculture priority projects selected by some ten villages adjacent to the proposed Mak-Betchou Wildlife Sanctuary. The projects which they indicated will improve on their household income, also serve as alternatives to mounting pressure on the proposed protected area. The socioeconomic survey conducted recently across the ten villages of Upper and Lower Mbo, witnessed an excited population, willing to embrace conservation of their flora and fauna. The ten villages, 7 in Upper-Mbo, and 3 in Lower Mbo, included Njungo, Ngientu, Fonki, Lebe, Lebock, Nzeleted and Mbemfe villages, Fonven, Mbetta and Dinte villages.

According to the villagers, being closer to the forest, coupled with their low financial power, most of them choose farming and hunting, as the best means for survival. They embraced government’s intention to gazette the forest to a protected area.

“I have been in this area for the past 48 years. My entire generation lived here and all we have been doing is hunting. I think I would have been doing something different if I had the money. Thanks to this initiative, I would be having my piggery and poultery farm,” Epah Jonathan, a hunter in Ngientu village said.

“We are so happy government is intending to make this our forest a protected area. More to that, we shall also be served with a series of livelihood projects to improve on our income and deter us from the forest. It’s a good initiative, we all embraced,” Frida Ekung, a farmer in Dinte village stating.

The priority projects identification phase facilitated by the Environment and Rural Development Foundation (ERuDeF), saw its Livelihood and Economic Development (LED) staff go across the various villages, sensitising them on alternative sources of livelihood other than hunting and destruction of threatened species. With great aim of integrating each community adjacent to the proposed protected area, in the recently launched conservation finance model duped Community Conservation and Social Enterprise Development (CoCoSED) Initiative, the LED staff explained is an initiative aimed at providing funding opportunities to local communities as a way of improving their livelihoods, scaling up development and diverting communities’ attention from the forest. All of that according to the economic experts, will be done without hunting or farming that destroy threatened species.

According to the conservation finance officer of ERuDeF, Kuddus Njang, the identification phase will eventually lead to comprehensive selection of three harmonised priority projects, common to the ten villages. 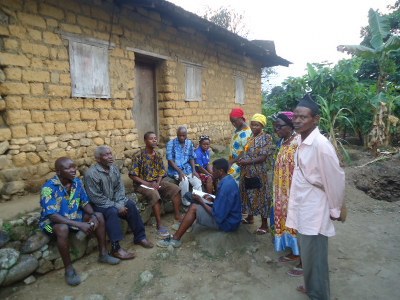 [/one_half]“These five identified projects will later be put in a table for a tally to select three most common projects in the ten villages so as to carryout capacity building training in the production, transformation and marketing of the products chosen. Also, in each of the projects chosen, value chain will be established so as to determine the value added at each stage of production in the chain,” Kuddus Njang said.

He added that the identification phase will lead to the development of the earmarked projects and eventual handing over to the communities.

“After the prioritization of these projects and capacity building conducted, the chosen projects will then be supported and setup in the respective villages by ERuDeF to improve on the livelihoods of the inhabitants especially those adjacent to the protected areas,” Kuddus said.

The identification of village-based livelihood projects is among a series of activities carried out by ERuDeF in its effort to facilitate the gazetting of the proposed Mak-Betchou Wildlife Sanctuary. The proposed protected area covers over 7000 hectares forest area. It is host to some 300 Nigeria Cameroon chimpanzees, 100 forest elephant, Drills, Cross River gorilla, bush baby, Blue duiker, Red River hog, red eared monkey and Mona monkey amongst others. The area is also home to some unknown plant species as well as globally threatened birds species like the Cameroon montane greenbul, crossley’s ground thrush, Bangwa forest warbler, Green breasted bush shrike and Red headed picathartes. Contiguous to the Bayang Mbo Wildlife Sanctuary, this biodiversity hotspot is surrounded is surrounded by close to seven fondoms, with three located in the Lebialem Division, and the rest in the Kupe Muanenguba Division