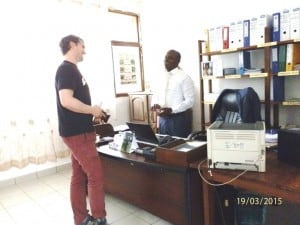 The Project Manager for Global Trees Campaign, David Gill, has expressed satisfaction with efforts made by stakeholders to conserve threatened tree species around the Mount Cameroon area in the South West Region of Cameroon.

Gill was on a four-day visit to some project sites and stakeholders’ offices.

Gill acclaimed the endeavours to conserve threatened trees around the Mount Cameroon area during a meeting with staff of the Environment and Rural Development Foundation (ERuDeF), project holders and partners on March 21, 2015.

“The job you are doing is overwhelming. We must lay emphasis on capacity building because we will not always be there so we need people to continue protecting these trees even in our absence,” said Gill.

The visit of the Global Trees Campaign Manager was to appraise the Conservation of Threatened Trees of Mount Cameroon Project, as well as the geography, species, new priorities, planting plans, challenges, and changes for the future.

Gill also hoped to get a consensus between one of FFI’s programs; the Global Trees Campaign (GTC) and ERuDeF.

Global Trees Campaign was formed in 1999 with main mission to stop the extinction of species through regeneration, capacity building and networking, hence Gill’s visit to Cameroon was to work with Project staff to develop a work plan for the 2015/ 2016 phase of the project.

Gill held a series of meetings with stakeholders notably with the South West Delegate of Forestry and Wildlife,(MINFOF) Eben Ebai Samuel, who described the collaboration between ERuDeF and MINFOF as affable.

Eben Ebai reiterated the need for effective monitoring and reporting, while encouraging the planting of Non Timber Forest Products (NTFPs) for economic reasons.

“If people have economic plants like contri onion, njangsa and the rest in their nurseries, they won’t go into the forest to cut down trees,” said the Delegate.

Gill made a courtesy call to the new Chief of Forestry for the South West, Bedima Antoine, who pledged his collaboration since it is also his duty to ensure that threatened species around Mount Cameroon and the South West are conserved.

The people requested for more support especially in terms of capacity building. They also appealed for the project period and scope to be extended.

The Conservator announced that MCTT will be planting 5.000 trees along the borders of the Buea-Muyuka cluster and another 5.000 in degraded areas within the Mount Cameroon National Park.

Gill’s sojourn in Cameroon was also made more exciting by one of ERuDeF’s Saturday sporting activities; Gill participated in the football match but regretted not being able to score any goal.