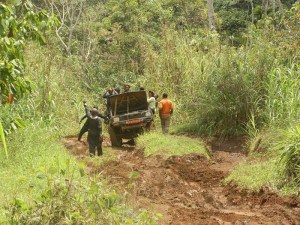 [/one_third]Your speech dies as soon as you leave Kossala and Mukete Estates behind you and begin the bumpy ride towards Matoh.

The rural areas of Cameroon crawl with fascinating levels of poverty closely associated with lack of roads or of their distorted nature that render them as useless transport networks. The flavour of exotic Cameroonian locales, of course, is more pungent than that in the towns.

[/one_fourth]Matoh is in the heart of an agricultural paradise in Konye Sub-division in Mbonge Division, South West Region. Ironically, it is cut off from the rest of the country by an impassable martoh marketroad. It has a sweltering climate that dumps some 2.800 mm of rain annually on the area. The climate is perfect for growing cocoa, the great cash crop of the Matoh people. Yet, contemporary chronicles contain insignificant mention of Matoh and its people who have to wrest a living from their environment that has been rendered hostile by lack of development.

Matoh sprawls like an oasis that has dropped from the sky. Upon the village, clapboard quarters stand in rows, etched by earth roads. The dwellings in Matoh are made of ponderous wood planks. Toilets and bathrooms are makeshift contraptions of bamboo fronds or scrap timber.

Matohnians have undergone hardships and dangers in living and travelling. They have been fodder for armed bandits who lie in wait between the Mukete Estates and the village; rough them up and rob them of their money and motorcycles, for those who own them.

Although Matoh could be said to be a hundred percent behind the ruling CPDM party, the sad story of the village remains uncompleted and hidden from the public eye. The village is plagued by a host of unanswered questions; it has a health centre with a single staff to man it. Electricity supply is still a badly lit dream, as poles stand naked in the village.

The average Matohnian has the horrendous road network to worry about more than anything else. Even if he never starves, the ordinary Matohnian peasant dwells in frightful squalor. He lives a very restricted life, unable to move farther than his farm, or change his occupation of farming or to travel on an excellent road to trade or commune with his neighbouring villagers.

[/one_fourth]Chief Imbia John of Matoh has a cryptic remark about his village: “My people are very law abiding, yet they suffer a lot. Our greatest problem is bad roads. Through our personal efforts, we try to maintain the roads, but unfortunately the roads become impassable almost as soon we work on them.”

Chief Imbia told The Green Vision that even the health centre has no medical supplies. Then again, the cocoa industry remains backward and undercapitalized, the result of years of exploitative tendencies of local buying agents (LBAs).

“Our cocoa farmers are victims of LBAs who take money from the desperate farmers and use it the way they like,” Chief Imbia said

Though many of Matoh indigenes are educated and middle class, most remain desperately poor. Even those who reap some financial benefits from their cocoa are simply beaten down because one of the pleasantries of life in Matoh is the elaborate drinking sprees and trade in sex during the cocoa peak season.

“Between August and December of every year, Matoh transforms from a deserted, wretched village into a cocoa boom town where beer flows and music blares throughout the nights. Prostitutes immigrate from as far as Douala and pitch camp here just to grab the rich pickings from cocoa sales,” Itoe Thomas says.

Matoh’s agriculture will respond to reforms if the sector is recapitalized by improving price incentives, encouraging competitive input markets, channelling more public spending and aid to the rural community, including the construction of proper infrastructure, and encouraging savings by farmers.