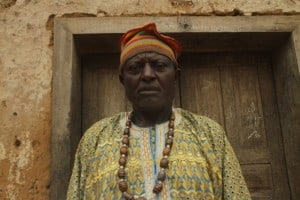 The Chief of Besali, Ekwe Tayem Robert, in Wabane Sub-division in Lebialem Division of the South West Region, has banned uncontrolled fishing and poisoning of waters to harvest fish in the rivers of Besali.

The Chief had discovered that their most stable source of protein has been seriously depleted and sizable fish has disappeared from the Besali rivers.

Fish is a staple for the people of Wabane.

The inhabitants of Besali seemed to find it hard to stomach the ban, but agreed with their Chief as they admitted that the population of fish in their rivers has diminished.

Chief Ekwe’s subjects are beginning to believe that the cheapest and fastest way to restore fish populations in their rivers is to stop reckless fishing.

The ban on rampant fishing will allow fingerlings to grow, mature and reproduce more fish for the people of Besali.

Besali village boarders the first and only protected area in the Lebialem Division – the Tofala Hill Wildlife Sanctuary.

The sanctuary harbours the critically endangered Cross River gorilla, and the Nigeria-Cameroon chimpanzee among other spectacular wildlife and plant species.

The Tofala Hill Wildlife Sanctuary was created following ERuDeF’s close to ten years of working with her partners to see that the ecological value of this region recognized and protected.

ERuDeF has been providing sustainable livelihood donations, carrying out sensitization meetings with stakeholders and communities as well as continuous conservation education in schools, and research.