The Prime Ministerial Decree Number 20145212 of September 29, 2014 states that a Sanctuary called Tofala Hill Wildlife Sanctuary in Wabane and Alou Subdivisions in the Lebialem Division, SW Region covering a surface area of 8087(Eight thousand and eighty seven) hectares is created and the Administrative Headquarter of the Sanctuary will be in Bechati, in Wabane Sub-division. 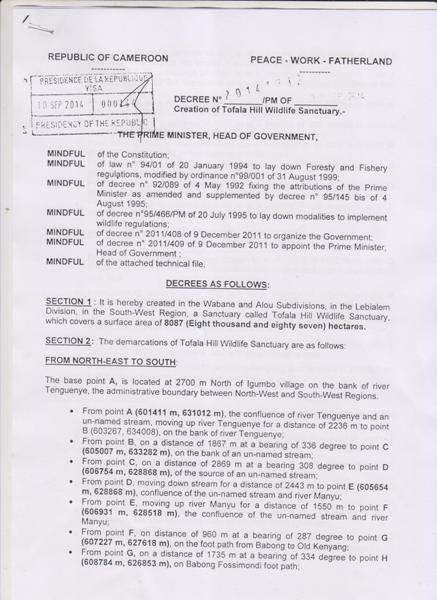 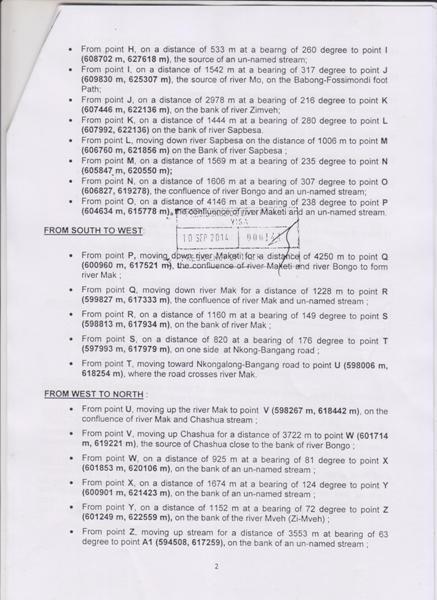 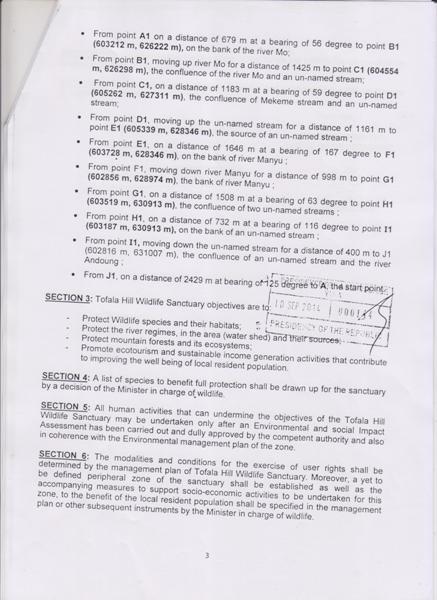 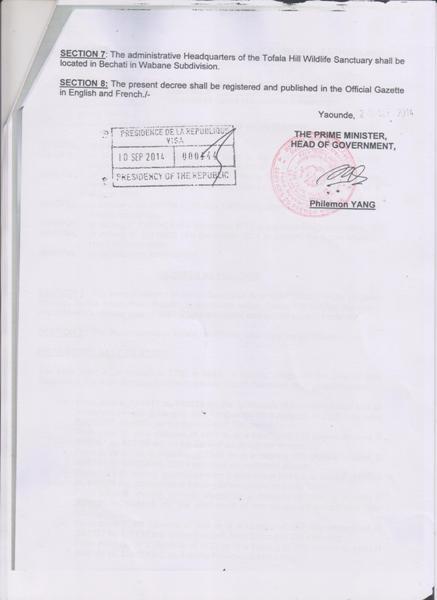 The news about Tofala Hill Wildlife Sanctuary being declared a fully protected site was received with a lot of joy the management of the Environment and Rural Development Foundation (ERuDeF) and other stakeholders.

What was your reaction when you first heard that the Prime Minister had signed a decree making Tofala Hill Wildlife Sanctuary a full protected site?

I received the news with a lot of excitement. The decree creating Tofala is a big success for us at ERuDeF and it shows a significant achievement as a real conservation organization and the battle we have been fighting for the last ten years. This is our first major conservation achievement and we are very excited.

One of the main reasons for the creation of this sanctuary was to provide a safe haven for the critically endangered Cross River Gorilla. What does this decision mean for this species?

It is a big excitement for the Cross River Gorillas who live in 11 fragmented landscapes. The creation of the Tofala Hill Wildlife Sanctuary comes as the third area in Cameroon where the cross river gorillas live to be uplifted into a protected area. In reality after Kagwene Gorilla Sanctuary, Takamanda National Park, now the Tofala Hill Wildlife Sanctuary, gorillas whose population are dwindling every year can now be said to have a safer place to live in. It is big news not only for us but for the survival of the gorilla in a longer term whose population number less than 300 in the wild.

ERuDeF becomes the first local NGO to have stood at the forefront of the creation of a protected area in Cameroon. This is remarkable. What is the secret and how did ERuDeF pull this off?

It is all about dedication, commitment and perseverance and ability to manage all the conflicts around the creation process. There were a lot of people who did not believe in this dream, but with support from our partners home and abroad and a dedicated team of Researchers, Tofala is today a Sanctuary.

What Role will ERuDeF be playing to ensure the long-term Management of the Tofala Hill Wildlife Sanctuary?

What Will happen Next after this decree?

This achievement is not all about ERuDeF, we want to thank all the individuals who contributed in one way or the other, agencies, our partners, the government of Cameroon, all together we were able to achieve to. A special thanks to the Ministry of Forestry and Wildlife for their dedication, the administration of Lebialem Division especially the Senior Divisional Officer, and his predecessors who fought relentlessly hard to make sure the sanctuary is a reality, the respective delegates of Forestry and Wildlife and the untiring efforts of the Southwest Regional Delegation of Forestry and Wildlife and not leaving out the staff and board of ERuDeF.

Besides the critically endangered Cross River gorilla, the Tofala Hill Wildlife Sanctuary is also home to the most endangered African chimpanzee and other endangered wildlife, such as the Drill and elephants.