One of Cameroon’s pioneer pieces in environmental journalism-The Green Vision Newspaper will celebrate its first anniversary this June 17, 2014. With over 12000 copies of 12 editions circulating around the national territory, many are those who have described the paper as an eye opener to some of the crucial environmental problems facing the country. 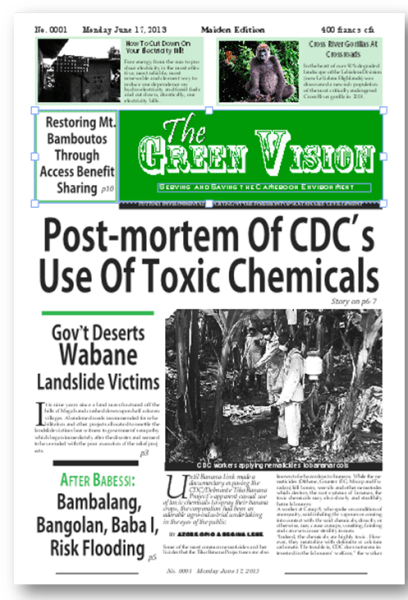 First ever edition of The Green Vision

The Green Vision Newspaper was launched in June 2013 by one of the leading Cameroonian conservation non-profit, The Environment and Rural Development Foundation (ERuDeF) with a vision of providing the Cameroonian public with news on the environment and sustainable development. Her birth was prompted by the fact that most of the existing media organs in the country had not given attention to environmental issues thus making the struggle for conservation slow.

In commemoration of its first anniversary, the paper spoke to some of its readers to find out what effect the paper has had on its audience. A fervent reader in Yaounde who works with a national daily-The Star, Theodore Mih Ndze said before the birth of The Green Vision, he was so ignorant about the environment “I was very excited to learn about the birth of The Green Vision Newspaper because I am a lover of nature, but I have never taken time to investigate any issue on the environment as a Journalist. After having read over 8 editions of this paper, I began to understand some crucial environmental problems like deforestation, pollution and climate change. I think it really brought a change in the Cameroon’s media world”.

Another reader in Buea said she has been able to develop interest in environmental reporting thanks to The Green Vision Newspaper. “I read a story about how the agro-industrial company CDC is discharging untreated waste into waterways causing sea creatures to die. I picked up interest since from that article and I have been investigating some environmental stories for my newspaper” Roselyn Njie, a Reporter for The Recorder Newspaper said.

One of Green Vision’s subscribers, CEO of a Non-profit-Pro Climate said The Green Vision has been very instrumental in educating his staff on current climate related issues. He said the paper has also given non-profits like his NGO a voice to talk about their activities and contribute towards environmental protection. He however advised that the paper should organize workshops to train other journalists on environmental reporting so that they can pioneer the change in their media houses.

The Green Vision is distributed nationwide by a French Firm, better known by its acronym, MESSAPRESS. The paper has equally reached local communities and has been a tool for environmental education for forest adjacent communities. 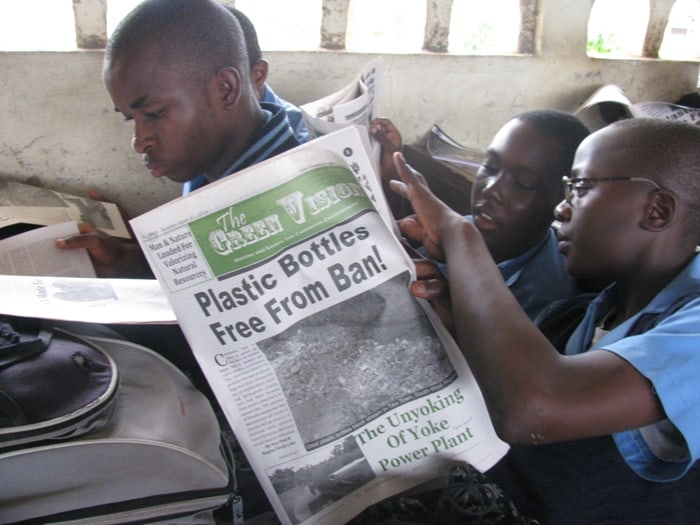 [/one_third]The Green Vision team has also distributed copies to school environmental clubs, who use the paper as a learning material.

As the paper celebrates its first anniversary, the paper looks forward to moving from a monthly to a bi-monthly publication and hopes to continue providing Cameroonians with incisive environmental news.