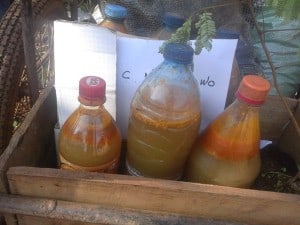 Farmers in the Western part of Cameroon have adopted a new method of fertilising crops. Juice squeezed from agroforestry leaves and other biological materials are applied on crops, yielding equivalent results as other fertilisers. The new technology was discovered by ERuDeF’s field based technician in Bakassa (West Region of Cameroon), Jean Baptiste Nitcheu,

According to Jean Baptiste, planting these trees year in, year out, gave him the new knowledge of creating his own fertiliser from natural and agroforestry plants. With his enthusiasm for the agroforestry project, he began to test different ways of making his life much better and it is from here that since 2010 he began to produce liquid fertilizer

“The liquid fertilizer is made out of water, urine of rabbits, and Acacia or Leucaena leaves. It requires no money. I have been able to make huge gains out of this fertiliser, helping other farmers in their farms. It highly increases soil fertility and thus, greater output from the farm,” Jean Baptite said.

He underscored the advantage of the liquid fertilizer over other fertilizers

“They are applied to plants by watering or spraying thereby reduce watering, it doesn’t require the labour of mixing it into the soil. The best part is, this mixture serve as pesticides as it kills all insects destroying crops,” Jean Baptiste added. 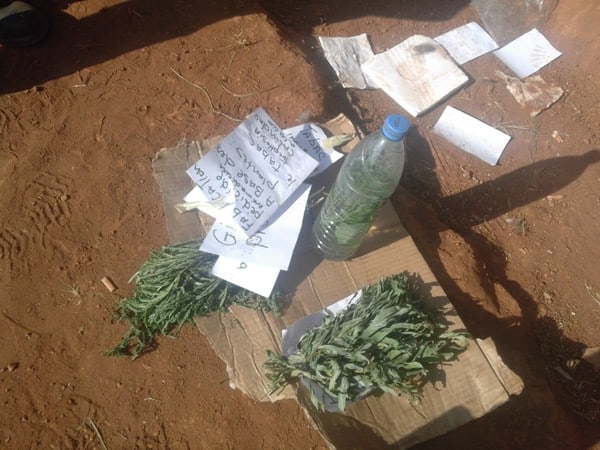 This new discovery has greatly helped many famers in the West Region. With the ease with which the fertiliser is applied, many farmers around Noun and Menoua Division of the West Region are investing in the use of the Liquid fertiliser.

“It’s a miraculous fertiliser. We apply on our cabbage and Irish potatoes farms, and honestly, our crops are really fresh. It’s so natural and it readily fertilises the soil,” Michelle Ngakam affirmed.

Hence food production is on the increase in this part of Cameroon. The said man,Nitcheu Jean Baptiste, has been working with Trees for the Future/Trees Cameroon since 2007 and has planted over 1million agroforestry species of trees.