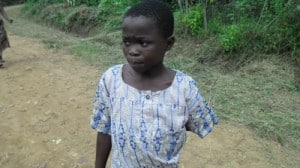 When a tragedy strikes, we mourn, but sometimes especially in the African tradition we ask questions why certain calamities befall certain people. We mourn with a hunter who lost his daughter on Sunday, June 9, 2013 when his son used his gun to shoot the daughter. We might be tempted to ask the question; Can gorillas curse their killers, given that the gun which was used to kill the poor girl belongs to a hunter.

As the story goes, at about 10 am on Sunday June 9, 2013 young Gideon Cheli, a form one student of GHS Besali, promoted to form two was playing with his younger sister with their father’s gun who just returned from hunting the previous night. Jokingly, Gideon shot and shattered the face of young Cheli Julie of age 7, and a class 3 pupil of Besali village and she died on the spot.

Eye witness account say these children were playing hide and seek with the gun not knowing that it was still loaded as the father had returned from an unsuccessful hunting expedition the previous night. The father Mr. Menkeng Benjamin in his early fifties was arrested together with the son by the gendarmerie brigade post of Bechati where they have been detained for one week. At press time, Gideon and his father were awaiting trial at the gendarmerie post in Menji.

Even though Besali village is not known for excessive hunting following series of conservation and community education conducted in the village by the Environment and Rural Development Foundation(ERuDeF), there are still some spotted cases of illegal hunting going on within the village. While there may be a myth attached to such killing, the need for more sensitization for local communities to drop their guns cannot be overlooked as it may end up gunning the hunters themselves.