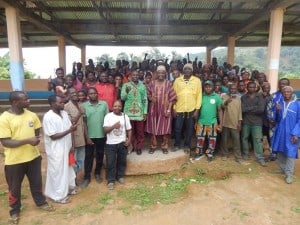 [/one_third]From Njoagwi, through Essoh-Attah, to Lebang Fondoms, the excitement, steam, and message were the same as inhabitants of the three main Fondoms adjacent to the proposed Mak-Betchou Wildlife Sanctuary massively mobilised themselves behind government for the classification of their forest into a protected area. This effervescence culminated in the writing of a motion of support by the inhabitants of each of the three Fondoms, which they transmitted through their chiefs indicating their acceptance classification of the proposed Mak-Betchou Wildlife sanctuary into a fully protected area to proceed.

With over 35 villagers taking part in the sensitisation exercise at the Njoagwi Fondom community hall, the indigenes were in high spirit in trumpeting the creation of a protected area adjacent to their community. From the youths, women, notables, Chiefs, and Fon, the call was the same; Njoagwi Fondom was ready to have the proposed Mak-Betchou Wildlife Sanctuary, classified as a protected area.

Speaking on behalf of the Fondom, Fon Fotabong VL, indicated that Njoagwi will stand a great chance of benefitting from the socioeconomic benefits that come with the creation of a protected area.

“We are so happy to have a protected area at our backyard. I have a strong conviction that we shall witness a boost in our standard of living, with the coming of this project. My villagers are ready to leave hunting and encroaching into the earmarked area for classification, but all of that will be a reality if they have an alternative source of livelihood” Fon Fotabong VL stated.

The same steam and tempo, was held in Essoh-Attah Fondom where over 90 denizens answered present during the village sensitisation meeting.

The Fon, HRM Assontia Valentine Foretia, said his greatest wish has always been that his generations live to see the great wildlife varieties in the Essoh-Attah forest, an area whose wildlife population has been increasingly decreasing due to illegal hunting and destruction of species habitat.

“Essoh-Attah owns a rich forest with many variety of species found inside. Unfortunately, most of the species have been killed by hunters. I am optimistic that with the coming of this project, Essoh-Attah will have most of these animals live as long as possible so those coming after us can also see them,” Fon Assontia Valentine said.

More than 20 villagers thronged the palace of the Fon of Fontem in Azih, to be enlightened on the stakes in the creation of the proposed Mak-Betchou Wildlife Sanctuary. The Fondom was not indifferent in the call for government to precipitate the classification process. Representing the Fon, Chief Dr Arong Alexander, said creating a protected area adjacent to the Lebang community, will be a great milestone in the conservation wildlife species in the area.

“The issue of creating a sanctuary is welcomed. It’s one of those activities particularly in the third world country, and for the next generation; to be able to conserve some animals where our children will be able to see in generations to come. On that scale and on behalf of the Fon who is unavoidably absent, the concept of the creation of a protected area adjacent to the Lebang Fondom, has been accepted. I can assure everyone present here that, the people of Lebang will follow government in the process leading to the creation of the proposed Mak-Betchou Wildlife Sanctuary,” Chief Dr Arong Alexander stated.

A snapshot of Village to Village Sensitisation and Way forward

The village to village sensitisation was aimed at enlightening adjacent communities to the proposed Mak-Betchou Wildlife Sanctuary on government’s mechanisms in creating a protected area. Speaking during the sensitisation tour, the Southwest Regional Chief of Service for Wildlife and Protected Area, Nono Joseph, underscored what these communities stand to benefit from the creation of the site.

He schooled the adjacent communities on the legal implication and considerations regarding the classification of a protected area. He also explained to the various fondoms, the steps already taken by government in creating the site, and what is left to complete the process.

For his part, the Director of Biodiversity and Protected Area Management and Head of the Environment and Rural Development Foundation (ERuDeF)’s Western Cameroon Office, Allen Tabi, showcased the different biodiversity potentials the proposed protected area inhabits. He projected the ERuDeF’s achievements regarding the provision of sustainable alternative livelihoods to adjacent communities to this proposed protected area aimed at dissuading from intruding.

The proposed Mak-Betchou Wildlife Sanctuary is an over 6000 hectares forest area located between longitudes 586,000m and 596,000m and latitudes 598,000m and 606,000m. It is host to over 300 Nigeria Cameroon chimpanzees, over 100 forest elephants, Drills, Cross River gorillas, amongst others. The area is also home to some unknown plant species as well as globally threatened bird’s species. Contiguous to the Bayang-Mbo Wildlife Sanctuary, this biodiversity hotspot is surrounded by three main fondoms, all located in the Lebialem Division.

The process leading to the creation of the protected area, is already at an advanced stage of completion. The Divisional Coordination Meeting will be proceeded with a letter to the Prime Minister and Head of Government of Cameroon, where the classification processes will be finalised.

The classification process of the proposed Mak-Betchou Wildlife Sanctuary is being facilitated by a Cameroon’s leading conservation non-profit Organisation, the Environment and Rural Development Foundation (ERuDeF) with support from Rainforest Trust with supervision from the Ministry of Forestry and Wildlife. 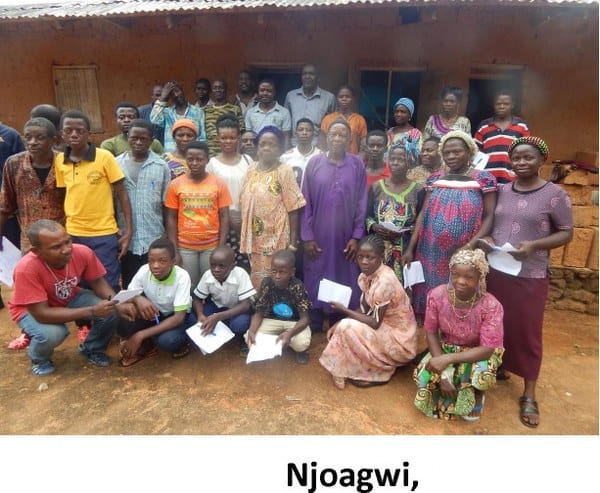 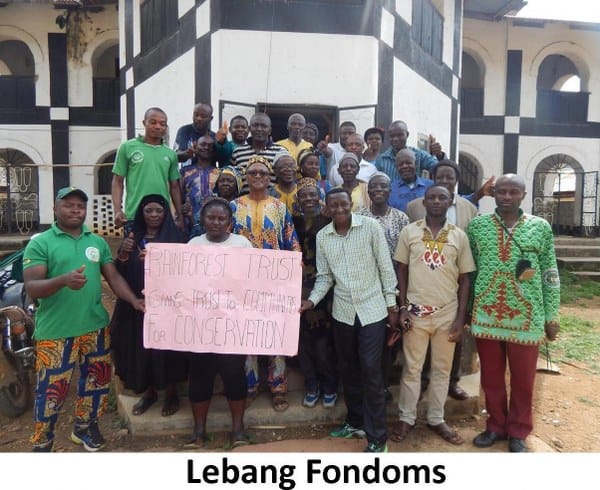 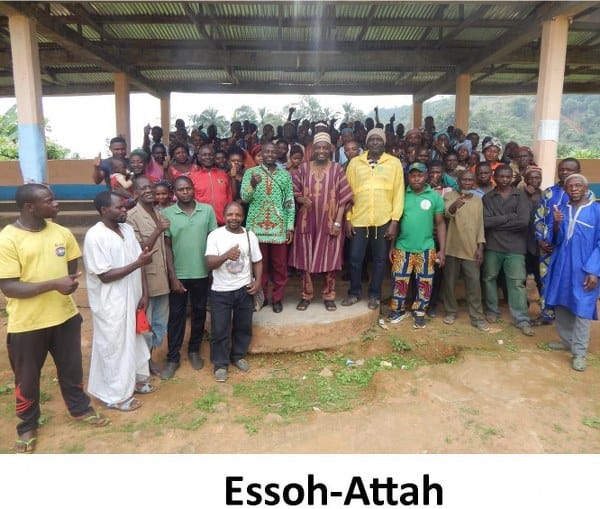