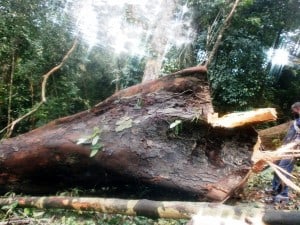 [/one_third]Imagine that you are desperately trying to keep alive a fertile endangered species to keep on bearing young ones and one day you discover it lying on its side, dead. Killed by ignorant villagers

In September 2015, the Environment and Rural Development Foundation (ERuDeF) Conservation of Threatened Trees of Mt. Cameroon Area project team was astounded when it discovered a mature Zebra wood tree felled in Bonjare village in the Mokoko area. In their efforts to restore the dwindling population of the critically threatened Zebra wood (Microberlinia bisulcata) which is endemic to the Mt. Cameroon area, the team had been collecting Zebra wood wildings under this very tree.

2011-2012 Survey statistics show that the most reliable source of this species was found within the lowland tropical forest of Mokoko River Forest Reserve and the Southern Bakundu but this keeps on reducing due to wanton exploitation. The ERuDeF team of foresters had been collecting Zebra wood wildings in this area in September every year for propagation following a seed collection protocol previously developed. From inception of project in 2011, the quantity of Zebra wood seeds had been encouraging but with the passing of time, the quantity collected had been constantly diminishing because of indiscriminate felling of matured stands.

In September, 2013, team was able to collect over 7000 seeds of Zebra wood under fruiting stands in the forest. In September 2014, 5000 seeds were collected but the recent hunting in September 2015 gave the team only 2000 seeds after searching the forest for four days.

Stands of Microberlinia from where previous collections were done in 2014 were already down and more than half of the forest was transformed into cocoa and banana plantations.

According to a community member, Itobo Damasius, who accompanied the team to the field, encroachment by immigrants into the adjacent communities (Bonjare, Balondu, Ekombe Mofako and Illoani) in the Mokoko area, is the main cause of the disappearance of Zebra wood.

“The chief of Bonjare and the village forest management committees (VFMCs) used to restrict exploitation and encroachment into these forests but because the community of Bonjare is too thick now due to immigrants from neighboring villages, and given that the greater part of the land is occupied by Cameroon Development Corporation (CDC), farms are now insufficient and the chief has no other option than to allow strangers to open farmlands right into the forest,” said Itobo.

Itobo said where there are big stands of Zebra wood, farmers get customers from timber companies and individuals in Douala who compensate them and log the whole area. Others fuel engine saws and cut Zebra wood by themselves to make space for farmland. All this is due to ignorance of the farmers of Zebra wood’s nitrogen-fixing abilities and the lack of understanding of the country’s forestry laws binding forest management.

The ERuDeF team together with the community members including the CDC workers around the area were so disappointed with the ongoing destruction of the country’s natural heritage and the fact that the endemic species like Zebra wood are rapidly moving towards extinction.