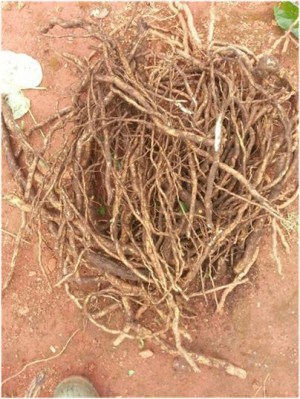 [/one_third]The community of Lewoh in Lebialem Division, Southwest Region, has agreed to host the second Access Benefit Sharing (ABS) Process in Cameroon through the valorisation of one of their biological resources known scientifically as Mondia whithei and traditionally as “letieh”

Roots from the Mondia whitei plant, which is locally used as a spice for traditional soups such as “Achu soup” and “Ngwi”, is of interest to the V. Mane Fils Enterprise, a French company dealing in fragrance and flavours.

V. Mane Fils S.A is one of those rare companies that is not only interested in exploiting natural resources for profit, but is also interested in making sure that communities from which these resources are exploited benefit equitably while preserving the biodiversity through its regeneration activities.

As follow-up to this process, ERuDeF, the implementing NGO, recently organised a training workshop in Lewoh on how to cultivate Mondia whithei.

To effectively achieve this, a management committee was created to take the responsibility of the regeneration exercise and all related activities of the project.

Members of the management committee were trained on how to best harvest stems for regeneration without destroying the main stem as well as preparing the stems using the best method of cultivation.

Presently, over 1000 stems of Mondia whitei have been planted around Lewoh.

The ABS Process originates from the 1992 Convention on Biological Resources and supported by the NAGOYA Protocol, which assures the equitable distribution of benefits arising from the utilisation and exploitation of biological recourses.

This is done through the principles of Prior Informed Consent (PIC) and Mutually Agreed Terms (MAT).