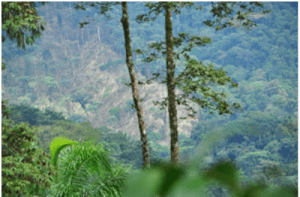 The biodiversity hotspot Mak-Betchou forest block located in the Lebialem Highlands of South West Cameroon is facing an unprecedented deforestation by the adjacent local populations. Large areas of the forest are cleared for cocoa, coffee and palm plantations. This anthropogenic activity has tremendous effect on the biodiversity of the Mak-Betchou Forest Block.

Deforestation it would be noted is one of the major causes of biodiversity loss in many tropical forest landscapes. Deforestation involves the continuous conversion of forest to the remnant of forest patches set in a matrix of non-forest vegetation. The altered microclimate becomes unsuitable for certain species by reducing the fragment size further, increasing mortality rates near the edge and reducing recruitment to their populations. The tropical forest ecosystem is often characterized by a heavy dependency on mutualistic species interactions for its stability. Many plant species in the tropical forests are reliant on animals as agents of dispersal for either pollen or seeds or both, if habitat fragmentation causes the extinction of certain important pollinating or seed-dispersing animals, this severely limits regeneration of rare plant species.

If nothing is done to stop the rate of deforestation in the Mak-Betchou forest block, abundant of species will become occasional rare, rare become very rare and very rare becomes extinct.

Mak-Betchou is a forest block located in the Lebialem Highlands of South West Cameroon. The highland runs from 180m to 2510m above sea level on the western side of Mount Bamboutous along the Cameroon mountain chain and falls within the equatorial rainforest zone characterized by two major seasons; the dry season (November-February) and the wet season (March-October). The annual rainfall recorded in the area is as high as 3500mm. The climate is characterized at high altitudes by low temperatures, low rainfalls, high relative humidity and the mountain is often covered in clouds.

The Mak-Betchou forest block act as a major stepping stone for the movement of wildlife to other adjacent protected areas such as the Banyan-Mbo Sanctuary in the west, the proposed Tofala Hill Wildlife Sanctuary in north and the Mone Wildlife Reserve and Takamande National park in the far-north. There is therefore need for concerted effort to fight deforestation in this zone.