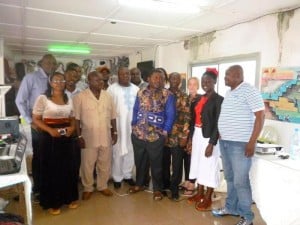 The proposed Mak–Betchou Chimpanzee Sanctuary, located in Lebialem division, SW, Cameroon will soon have a legal status. This follows a two-day workshop to prepare the Technical Note for the creation of this sanctuary that took place on June 23 and 24 in Buea. The workshop, organized by the Environment and Rural Development Foundation (ERuDeF) was aimed at bringing together stake holders involved in the classification process for the creation of a protected area, notably the Ministry of Forestry and Wildlife MINFOF SW to prepare a Technical Note that would give the proposed sanctuary a legal status.

Also speaking at workshop, The Divisional Delegate of Forestry and Wildlife (DDMINFOF), Lebialem, Mboui Jaques congratulated ERuDeF for her efforts towards conservation and promised their collaboration and support each time a protected area is identified and proposed. ‘We did not come here to joke, Mak- Betchou is rich in wildlife species. It is our responsibility to support partners in conservation like ERuDeF. We are also aware of the benefits that Mak – Betchou if protected can bring to the region and the country, that is why we must ensure that this technical note is properly done, before we forward it to Yaoundé, just as we did with the Tofala which has already gone very far’ he said.

Mr. Mboui Jacques’s reaction was not different from that of the Divisional Delegate for Kupe Muanenguba, Kebou Jean Pierre, the SW Regional Chief of Forestry and Wildlife, Nono Jeseph, the Chief of Section for Wildlife, Lebialem, Njimin Thomas Amin, and the Chief of Forestry and Wildlife for Fontem, Ndnitchiba G. Edisson, who all appreciated work done and promised collaboration at their various levels, to ensure that the Mak- Betchou Chimpanzee Sanctuary moves from being just a proposed to a legally classified protected area.

According to Nono Joseph, the sanctuary if protected would not only be implementing the Cameroon Government Policy on Forestry and Wildlife Management which stipulates that at least 30% of the national territory be set aside as protected areas (law No. 94-01 of 20 January 1994), but would also contribute to biodiversity and nature protection and improve on the livelihood of the local communities around the Mak- Betchou area through job creation.

With the technical note done, hopes are rife that the classification goes on as planned since according to the Coordinator ERuDeF’s Wildlife conservation program, Enokenwa Allen Tabi, the gazzetment process now depends greatly on the promptness of government reaction.

The Lebialem division has a stunning landscape with sub-montane to montane areas, fogged and gallery forest (forest mosaics) interspersed with savannah vegetation that also attracts some endemic plant species. The area is a major watershed that feeds the river Manyu. In spite of its richness in forest and wildlife resources, Lebialem Division remains the only division that does not have an existing protected area officially classified in the whole of Southwest region. The distribution of protected areas is a s follows; Manyu has 47.74%, Ndian 59.6%, Fako 23.2 %, Meme 13;8 %, Kupe 40.2 % and Lebialem 0%.