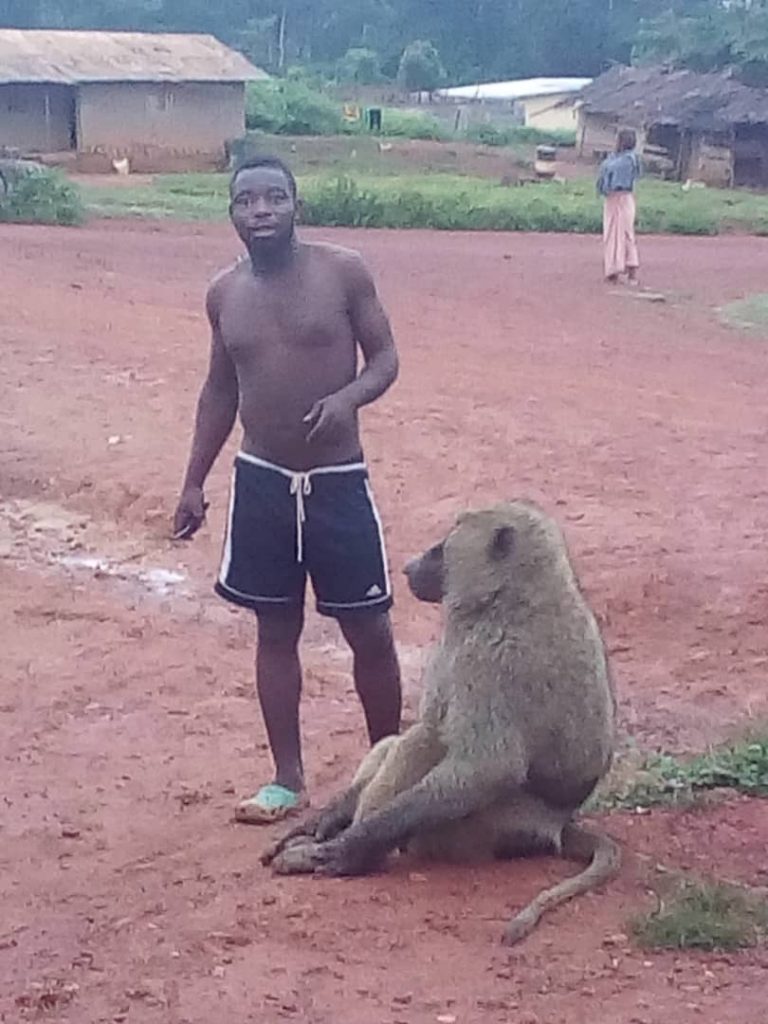 For a month now and counting, the inhabitants of Deng Deng have been delighted to receive a new family member, (a male Olive Baboon). He has been swaggering around the community, visiting one household to the other, eating anything which he finds suitable and tasty. Despite countless efforts to carry the Olive Baboon back to the Park, he remains adamant going back to the wild, as he has not hesitated in finding his way back into the community despite several attempts of getting him back to the wild.

The people are already getting used to living with the Baboon as they even play and eat with the Baboon. Many of the people in the community revealed that the Baboon is like of one their family members and everyone loves him so much.   “If a day passes without us seeing the Baboon, we are going to be very worried, and search until we find him” one of the villagers recounted.

What may have caused the Baboon to leave the forest and refuse going back?

Males establish their dominance more forcefully than females. A male disperses, or leaves his natal group and joins another group, after reaching sexual maturity. Adult males are very competitive with each other and fight for access to females. Higher dominance means better access to mating and earlier access to food, so naturally a great deal of fighting over rank occurs, with younger males constantly trying to rise in position.

Could it be that the Baboon was chased out of his group? This is a very big possibility. The baboon may have been humiliated and his dominant position taken. When older baboons drop in the social hierarchy, they move to other groups to fight dominant position. The younger males who pushed them down often bully and harass them. This may have frustrated him out of the forest.

Could his continuous denial to stay in the forest be as a result of lack of Food? This is definitely not the reason because Baboons are omnivorous and like other baboons, will eat practically anything. As such, it is able to find nutrition in almost any environment and is able to adapt with different foraging tactics. For instance, the olive baboon in grassland goes about finding food differently from the ones in a forest. The baboon forages on all levels of an environment, above and beneath the ground and in the canopy of forests.

Baboon (Papio anubis), also called the Anubis baboon, is a member of the family Cercopithecidae (Old World monkeys). The species is the most wide-ranging of all baboons, being found in 25 countries throughout Africa. It inhabits savannahs, steppes, and forests areas. They live in groups of 15 to 150 individuals, made up of a few males, many females, and their young. Each baboon has a social ranking in the group depending on its dominance.

With funding from WORLD LAND TRUST,ERuDeF is supporting both the local communities of the corridor area and the Divisional Delegation of Forestry and Wildlife for Lom,  to create two Community Forest Reserves of respectively 5,000 ha and 4,588 ha, to preserve a vital corridor between Deng Deng National Park (DDNP) and Belabo Council Forest in Eastern Cameroon.

This forested link is currently threatened by habitat loss from timber extraction and clearance for subsistence farming. The project is is very critical in preserving  the forest habitat for a wealth of resident endangered species including but not limited to the Western Lowland Gorilla, Central Chimpanzee, African Forest Elephant and two species of Pangolins ( Giant and White bellied Pangolin). Whilst the forest is still relatively intact, a window of opportunity exists to preserve it against a trajectory of rapid forest conversion in the region.