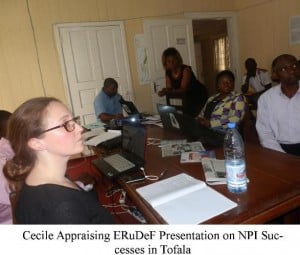 Exciting news has emerged at ERuDeF; its partner, Man & Nature, has deeply appreciated the organisation for its consistent development and conservation efforts in the Tofala Hill Wildlife Sanctuary and its adjacent communities. Man & Nature Executive Director, Cecile Lachaux, expressed such satisfaction during her visit to assess the impact of the Net Positive Impact (NPI) project on April 4, 2016.

Lachuax said despite the few challenges that characterised the project at the initiation stage three years ago, it successfully impacted the lives of Tofala adjacent communities while ensuring the long-term conservation of natural resources and great apes in the Tofala Hill Wildlife Sanctuary.

“I am quite impressed by the work you are doing, with staff strength of about sixty people and still growing. I think the organisation is doing a lot and really has many beautiful projects. I challenge you to strengthen what you have and to improve on the business structure of the organisation,” Lachuax said, before heading off to ERuDeF project sites in the Lebialem Highlands.

“’ERuDeF supported me with five modern bee hives and three months later, I harvested 11 litres of honey that fetched me 27,500 francs CFA. I think bee farming is much more lucrative than the traditional market gardening that we used to practise here,” said Apabelou Frederick, Vice President of the Mmock-Leteh Highland Bee Farmers Cooperative Society created by NPI.

Lachaux visited the Bangang Bee Farmers’ Common Initiative Group, the Besali palm oil mill, pigpens in Nwangong and GHS Besali that benefited from NPI-initiated book donation. According to the President of the Tofala Women’s Association, Ms. Voluntary, the project has greatly alleviated poverty among the association’s members.

“We now produce and market medicated soap, thanks to the training we received as part of the project,” Voluntary told Lachuax after demonstrating the various stages of the production of the soap.

At Government School Banti, Lachaux was amazed by the hilarious welcome she received from the community that turned out to thanked her organisation for the gift of their first-ever modern six-chamber toilet. She received the same warm welcome at GS Mmockmbie where a toilet was donated in 2014. 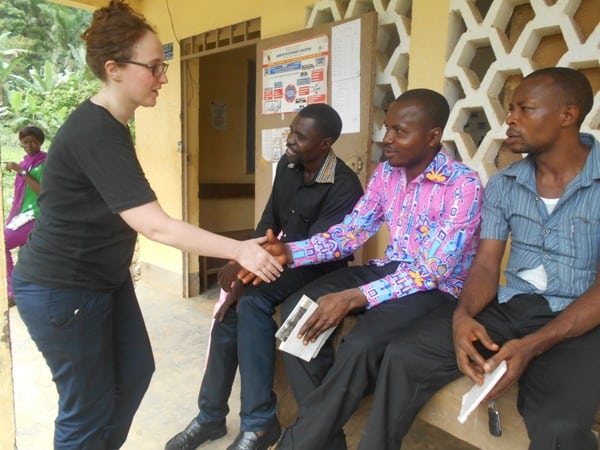 ‘When you work in a development sector, there are always a lot of speed bumps on the way but thanks to ERuDeF and other national NGOs we have been able to develop long-term programmes that conserve biodiversity and also empower adjacent communities. We look forward to a more fluid working relationship and to source for more funding to support projects in and around the Tofala Hill Wildlife Sanctuary. We also have the Mondia Whitei and Echinops projects,” Lachuax said at the end of her trip.

She suggested some possible areas for improvement to include the development of a more comprehensive business plan that incorporates the marketing of livelihood products and ensuring the long-term sustainability of the livelihood projects to guarantee the wellbeing of Tofala adjacent communities.

The ERuDeF/Man & nature partnership dates as far back as 2010 and is centred around developing projects that conserve biodiversity and improve the livelihood of communities adjacent to protected areas.

The most remarkable outcome of this partnership was the signing of a decree in 2014 gazetting the Tofala Hill Wildlife Sanctuary.