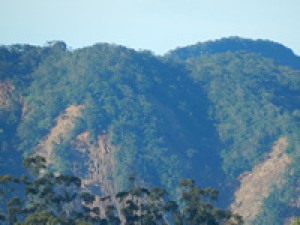 The Proposed Bangwa-Mbo Wildlife Sanctuary (BMWS) is located within Fontem Sub-Division and Nguti Sub-Division in Lebialem and Kupe-Muanenguba Divisions respectively, Southwest of Cameroon.

The area is circumscribed under the Lebialem Highland Conservation Complex (LHCC), and has unique features due to its geography, cultural diversity and economic opportunities.

This conservation complex is home to 60 Cross River gorilla, Nigeria-Cameroon chimpanzee (most endangered African chimpanzee), African forest elephants, Drills, endangered birds, plants and amphibians. The area is accessible from Bangwa site through Dschang and from Mbo passing through Santchou. The road network generally is poor and the area can easily be visited using bike.

The total population in the two Subdivisions is about 50,000 inhabitants occupying a surface area of 441,568 ha. Bangwa Mbo area is a forest montane area. It has a characteristic of tropical forest mixed with secondary and primary forest. Common species of trees in the area include: palm trees, iroko, silk cotton tree, ebony, Indian bamboo and a series of climbers among which are wild rubber.

The area harbours huge quantities of Non-Timber Forests (NTFP) such as kolanuts, njansang, eru, cashew, monkey kola, bitter kola, amongst others and need to be well managed to benefit the future generation. The inhabitants live on a range of mountains varying in height from 600 to 1300 m in both Bangwa and Mbo area. The people live in compounds scattered over the mountain side.

Mountains have rocks with many caves. The soil is mainly composed of a tenacious red clay and is not of a very high standard for farming. At the lowest levels, the quality of the soil improves greatly and is rich in leaf mould.

In Mbo, part of the soil is partially sandy and not very fertile. No information about the presence of any minerals of economic importance was recorded.

The climate is generally of the equatorial type with two main seasons; a short dry season of about four months [November to February] and a long rainy season [March to October] with an average temperature of 25oc to 35oc. There are many rivers and streams that run down the hilly topography of the area.

Two main rivers exist; Mfu and Betchou which take their rise from the Essoh Attah and the Njungo mountains respectively in the southern part and empty into River Manyu. Streams are drying off as a result of intensive anthropogenic activities on their catchments.

Bangwa has a complex history; Bangwa comes from the union of the nomads who were living on the Mountain and forest hunters who came from Mbo area. From origin, Bangwa and Bamileke have many common elements. In Bangwa land, we have three Fondoms; Lebang, Essoh-Attah and Njoagwi.

Mbo people originated from Sandjou area in East Cameroon and they played an important part in the early dynastic history of Bangwa. In other Bangwa chiefdoms minor sub chiefs claim Mbo ancestors. Villages in Mbo directly involved in the project are: Elumba, Nsoa, Etawang and Fosongwachen.