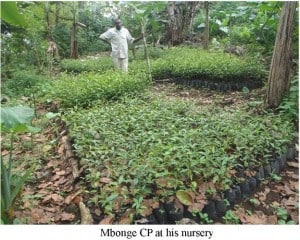 [/one_third]Over 1600 seedlings of Microberlinia bisulcata locally called Zingana have been planted into the Meme River and Southern Bakundu Forest Reserves as a way of regenerating this threatened species which has suffered wanton exploitation from community members and illegal exploiters over the years. The seedlings planted by the Kumba Council, were raised by the Chief of Forestry and Wildlife Post (CP) of Mbonge Mr. Amba Ndongo Cyprian.

“After attending a series of onsite trainings organized by the Environment and Rural Development Foundation (ERuDeF) on the identification of the tree species, seed collection and nursery management, I decided to set up a nursery besides my house” Mr. Amba said

The project was conceived on the basis of lack of knowledge on the conservation status of the species by the local population, the inability of local Chiefs of Forestry Posts to identify the tree species and the fact that past attempts to prevent the wanton logging of the species were not entirely successful. The project thus explored a new strategy; the collaboration of Village Forest Management Committees (VFMCs) and local Chiefs of Forestry Posts and Wildlife in the Mokoko area to guarantee success.

According to the Project Coordinator Ms Tengem Adeline, the role of local communities in the fight against the illegal exploitation of the species cannot be over looked. “We wanted to form a synergy between the VFMCs and CPs to support this fight on the ground. This entailed lots of sensitization and workshops at community and village levels’’ she explains.

Workshops aimed at empowering local authorities to take up the struggle to save Zingana were organized in the Mokoko Area.

“Barely eight months after heeding to ERuDeF’s advice I am already reaping…. I was encouraged and set up a Zingana nursery after the September 2015 meeting. Just last month (May 2016), I sold 1600 seedlings of Zingana to the Kumba Council that fetched me some cool 800,000francs”’ Mr. Amba, the CP of Mbonge testified.

“I saved money for my children’s education and I am hoping to sell the rest for further expansion of the nursery”, he added.

The fight has not however been limited to nursery development; VFMCs have joined CPs in conducting patrols at the Mokoko area in order to scare illegal exploiters.

According to the CP of Illoani Mr. Osang Johnson Ekwale who heads the patrol team, illegal forest exploitation activities are on a decline in the area.

‘This decline in illegal exploitation of Zingana is being attributed to the constant presence of the patrol teams in the forest and possibly the decrease in the price of Zingana’ he said.

According to ERuDeF’s Director of Forestry, Ms Limbi Blessing, there is hope for the critically endangered Microberlinia bisulcata.

The President/CEO of ERuDeF, Louis Nkembi , on his part says a lot has been achieved within the one year life span of the project.

“Within one year of the project, we have been able to bring the principal stakeholders of the project who are supposed to be the custodians of the area, the Village Forest Management committee and staff of MINFOF to recognize the importance of this tree. This has led to Regional Delegate of MINFOF placing a temporary ban on the exploitation of this species” Mr. Louis said.

He also disclosed that a technical report has been sent to MINFOF recommending total ban on the exploitation of this species as it was done with Bobinga in East Cameroon.

The ERuDeF boss said achieving the goal of the project was mingling with a number challenges including limited funding, administrative bottle necks and no collaboration from a logging concession in the Mokoko area.

With the ‘Save Microberlinia bisulcata project’ officially coming to an end, the ERuDeF President/CEO called on the international community to join force with ERuDeF and support the organization to obtain a total ban on the exploitation of this tree species that is endemic to the Mount Cameroon Area.

He expressed gratitude to the Cameroon government through MINFOF, the VFMCs and the local communities for their collaboration in this project. Mr. Louis was particularly grateful to Mohamed Bin Zayed Species Conservation Fund for her financial support hoping that funding could be extended.