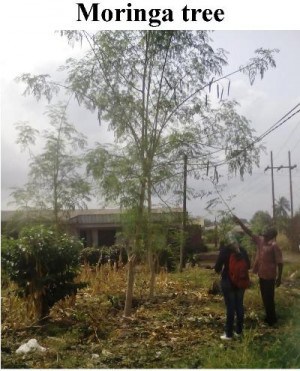 In 2015, Trees Cameroon distributed over 350,000 tree species of Acacia, Leucaena, Calliandra, Prunus and Moringa to farmers in the Southwest, Northwest, West and Littoral Regions.

Ayuk Rudolf, ERuDeF’s Trees Cameroon agroforestry field technician for Fako Division, was one of the recipients of the Moringa seedlings.

Ayuk has been working with Trees Cameroon since 2011. Earlier in 2013, he had put up a quarter hectare of Moringa at Mile 14 Dibanda in Buea, and today he is making money from the leaves of the ‘miracle’ tree.

So far, Ayuk has made over 100,000 francs CFA from selling Moringa leaves.

Ayuk also sells the powder from Moringa leaves in 0.35 litre bottles for 5,000 francs CFA. He is now planning to expand his production of Moringa as the plantation of 50 mature trees is fruiting for the first time.

The seeds would be ready for use by September 2016.

Indeed, Ayuk’s Moringa plantation is beginning to bear fruits for his family and his neighbours.

Ayuk educates his neighbours and friends on the health benefits of Moringa. He also helps them with Moringa leaves to treat one disease to the other. 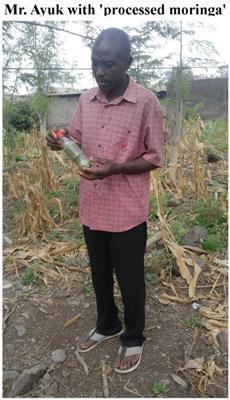 One Nkwanyang John also buys Moringa leaves from Ayuk, processes them into powder and sells the miracle product to his community.

To meet the increasing demand for Moringa powder locally, Ayuk and Nkwanyang plan to start mass production by creating a hectare of Moringa plantation in Mile 14 Dibanda.

Nkwanyang has a machine to ease the transformation of Moringa leaves into powder.

Ayuk says Seeds for the new plantation are available given that 12 out of the 50 mature Moringa trees in Ayuk’s old plantation are fruiting as such, money that would have been used to purchase seeds would be used to solve some other family problems.

According to Ayuk, a tree can give averagely two kgs of Moringa seeds, thus 24 kg of seeds would be available to plant in the one hectare of land.

Ayuk says they would move to transforming Moringa seeds into liquid in the nearest future.

Health researchers around the world nicknamed Moringa ‘The Miracle Tree’ due to its miraculous healing abilities. It builds our muscles, bones and teeth.