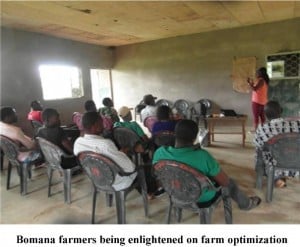 [/one_third]Farmers of the Bomana cluster of the Mount Cameroon National Park have expressed interest in the Agroforestry Farm Optimization Model, introduced last February, 2016 during a workshop by the Environment and Rural Development Foundation (ERuDeF).

Introduced as a means of ensuring the sustainable conservation of threatened trees in the Mount Cameroon Area via the community management approach, the Bomana farmers were trained on various stages of grafting including root stock preparation, stock raising in polythene bags, cutting and attachment of scion and management of the grafted trees.

At the end of the workshop, farmers expressed interest in adopting this model in their farms

“Farmers in Bomboko cluster have been benefiting from this system introduced some time ago by the Mount Cameroon National Park…we are very happy that ERuDeF has introduced this in our community,” said Oscar Eko, a member of Village Forest Management Committee.

Other farmers, whose farms were located in the National Park and were sent off after the creation of the park, said such a model will help them maximize yield on the small available farm land, which they now have.

Over 80% of farmers at the workshop where thrilled by this project and promised implementing it in their farms; they were earmarked for a Regional grafting workshop that would be launched nationwide by April, 2016.

The workshop was attended amongst others by the Traditional Ruler of Bomana, Chairman of the Bomana community, Village Forest Management Committee (VFMC) Adviser, members of VFMC, other farmers and ERuDeF team.

A similar activity will soon be conducted in Bafia, Woteva and Bakingili.