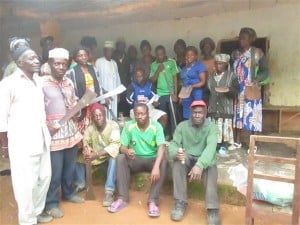 [/one_third]Some Farm tools have been donated to producers of the Mondia Whitei plant in Lewoh, Lebialem Highlands of Southwest Cameroon.

The equipment comprising farm hoes, cutlasses, conservation plastic materials, among others, were distributed to over 30 farmers, Saturday June 10, 2017, by the Coordinator of the Access and Benefit Sharing (ABS) Initiative at the Environment and Rural Development Foundation (ERuDeF), Ebenezer Akumbo, in collaboration with the Mane Foundation. The occasion took place at Chief Fuafeleka residence at Atetem, Lewoh.

According to the ABS Coordinator, the gesture is aimed at equipping Mondia farmers with the right farm tools so they step-up they production of the plant, hence, meeting up with the 2017 target.

He added, the move came to meet the demands of the farmers who before now, had made requests in that direction.

“During the launch of the 2017 Mondia farming season, some farmers forwarded as their demands, the need for good farm tools to facilitate cultivation. That is why we returned with these equipment to complement their production process. The equipment will cover a greater dimension for more sustainable cultivation of Mondia plants for the future. I believe with the farm tools and some motivations that we have injected into the farmers, we shall meet our 2017 objective by the end of the year,” Ebenezer Akumbu said.

The farmers were elated to receive the farm tools and motivation from ERuDeF and partners.

“We are grateful for the farm tools. It will go a long way to improve on our cultivation techniques, hence, improving on our production level,” Pa Sebastiean Nkemganyi, President of the Lewoh Mondia Management Committee said. 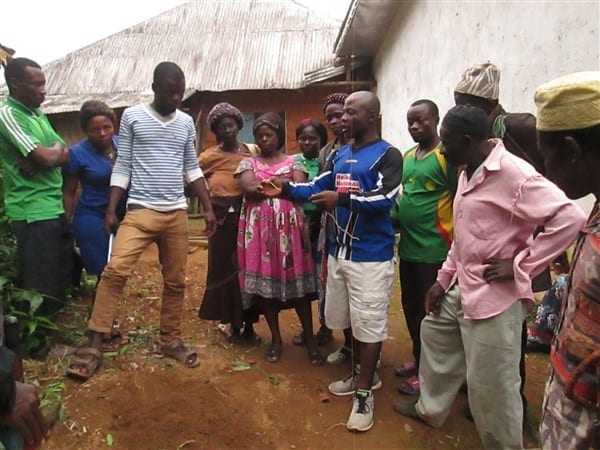 [/one_half]The farmers promised to invest time in Mondia cultivation given that it is proving to be more lucrative than cocoa.

“A kilogram of Mondia roots cost CFA1,250 ($2) in the market. That price is far more than a kilogram of cocoa that many of us in the past, used to plant. Therefore, we shall be investing most of our time on planting this money spinning plant,” Nkemganyi Prisca a veteran Mondia farmer said.

The ABS team used the occasion to train the farmers on news methods of planting the Mondia plant. In addition, farmers who had successfully planted the Mondia plants, which are doing well, were motivated financially by the ABS team.