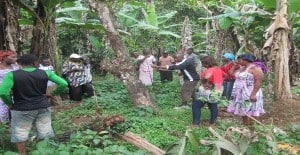 [/one_third]The 2017 farming season of one of the plants within the Access and Benefit Sharing (ABS) Initiative in Cameroon, Mondia whitei, has been launched in Lewoh, Lebialem Division of Southwest Cameroon.

The launching was carried out, Wednesday April 12, 2017 by the Coordinator of (ABS) Initiative at the Environment and Rural Development Foundation (ERuDeF), Akumbu Ebenezer.

During the launch, the ERuDeF ABS Initiative boss introduced a new planting configuration for the Mondia plant using the plant cuttings, which according to him is more efficient

“Root cuttings are more efficient than using seeds to plant Mondia. Cuttings have fast growth rate and the time for maturity is shorter, compared to seeds. In carrying out the cutting method, make sure you cut within buds. That will give room for germination, roots initiation and stem sprouting,” Akumbu said.

Speaking on behalf of the community, His Royal Highness Chief Fuafeleka expressed gratitude to ERuDeF for introducing this new method.

He indicated that with the coming of the new method of planting, more Mondia roots will be produced, improving on the livelihoods of the people, and boosting the economy of the community. 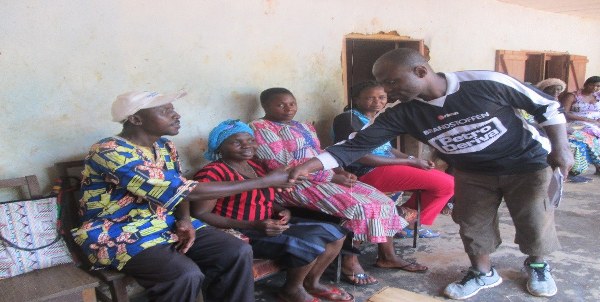 For his part, the President of the Mondia Management Committee, Pa Sebastian Nkemganyi, expressed with much delight, the fact that many people in the community who suffer from sexual weakness will have an instant solution thanks to the Mondia whitei project in Lewoh.

He appealed for constant follow up of farmers so everyone will imbibe the new method to finger tips.

One of the farmers, Mama Fuafeleka Cherita, and Vice President of the Mondia Management Committee, said the launching of the Mondia planting season through the use of cuttings will help to reduce the stress and difficulties they use to encounter just to have seeds for planting.

The entire community was enthusiastic to know this new configuration will subsequently be applied. The system will target in situ planting (planting in the forest).

Mondia whitei is a popular medicinal plant, which is endemic to Africa. Since antiquity, M. whitei has been used by African people to treat various ailments.

Throughout Africa, the roots are highly valued as an aphrodisiac and also use to treat sexual weakness. M. whitei also has horticultural, nutritional and other socio-cultural values as reported in other countries such as South Africa, Nigeria, Zimbabwe, Kenya, Uganda and Malawi.

In an attempt to maintain the biodiversity and the sustainability of the plant, the Mane Foundation in France has embarked on getting the roots for it fragrance and food industry. The Foundation collects the roots in a sustainable manner.