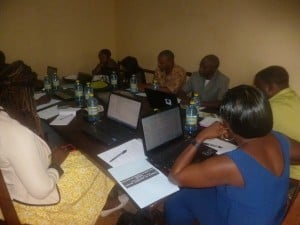 The President and Chief Executive Officer (CEO), Louis made the call during a two-day meeting held at the conference room of the Headquarters in Buea.

According to ERuDeF’s boss, such approach will help directors to have a perfect grip of all activities in their departments, and will enable the heads to cover up any gap in the absence of any subordinate.

“A landscape manager is one who understands and can operate all divisions and units in their department. In that way, they can step up to fill any gap so as not to put their department wanting,” Louis Nkembi said.

The ERuDeF’s Boss introduced and elaborated on an eight step administration and evaluation model adapted from the Drexler/Sibbet team building model. According to him, orientation, trust building, goal clarification, commitment, implementation, performance, renewal and organisational mission are the eight steps that account for effective leadership and evaluation in an organisation.

“ERuDeF has grown beyond Africa. So to flow with the current trend, directors within the organisation will undergo increased and constant training and capacity building so they can in-turn, pass it down the knowledge to their subordinates for efficient output in the organisation,” Louis Nkembi expounded.

The model, according to Louis, came as a result of poorly scripted reports and plans from various departments. The CEO advised directors to use the model as a tool to conduct self-evaluation before passing down the knowledge to the other members of their departments.

The two-day meeting of eight directors headed by the President/CEO was strictly academic. All directors present had the opportunity to digest the new model and further rated their past activities and output.

Participants attested that the meeting was timely as the Organisation keeps extending its tentacles to other parts of the world, so too is it important for the managers of various department and projects of ERuDeF, to strengthen their skills.

“I must say this meeting has been more of an intellectual exercise, and also has been very nourishing. I think more of such sessions should be organised so we continue to acquire new ideas and skills for Organizational growth,” Director of the ERuDeF Institute of Biodiversity and Non-profit Studies, Akeh Nug attested.

Other staff could not help but thank Louis Nkembi for such a novelty.

“I thank the CEO for this wonderful and beneficial opportunity to learn these new principles. My capacity has indeed increased and we expect more training from our boss,” Director of Budgets and Financial Planning, Vivian Tenjem added.

The Directors unanimously pledged to put in their best and also to transmit what they have learnt to their subordinates.