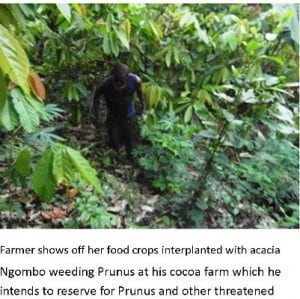 [/one_third]Embola Simon Mossisa is a farmer whose life has been transformed by the growth of nusery development with the aim of replanting threatened trees species. Together with his wife and children, Embola has constructed a 10-000 capacity nursery of Prunus africana and mahogany.

Beyond simply raising seedlings of Prunus africana and mahogany, Embola has been selling them to other farmers who are interested in the protection of threatened tress, which has already fetched him over 700.000 francs CFA.

“I am very grateful to ERuDeF for providing me with stock seedlings. I have sold some seedlings to Buea Council and the money I received, I used to renovate my house and send my children to good schools,” says Mosisa. “At first, my children were going to government schools but with this money, I was able to transfer one to a professional school. Last year (2015), I sold 500 mahogany and 3,300 Prunus seedlings to Buea Council for regeneration on the slopes of Mt. Cameroon. This fetched me 700,000 francs CFA.”

Besides being able to cater for his immediate family members, Mosisa extends his largasse from his nursery to relations who are dependent on him.

Mosisa is ERuDeF’s nursery attendant of Bova I, a village perching on the eastern slopes of Mt. Cameroon.

He received several training sessions in nursery creation and management from ERuDeF and began to apply the skills to his personal nursery of Prunus.

In 2011, Mosisa joined fully the Threatened Trees project and received 20 mahogany seedlings from ERuDeF to expand his bank of seedlings of threatened trees in the Mt. Cameroon area.

“When we started this project establishing nurseries in communities; Mosisa established a nursery behind his house. He involved his wife and kids to collect seeds and wildings of Prunus and mahogany to nurse; then replant in his farm,” says Adeline Tengem, Assistant Coordinator of ERuDeF’s Threatened Trees of the Mt. Cameroon Area project. 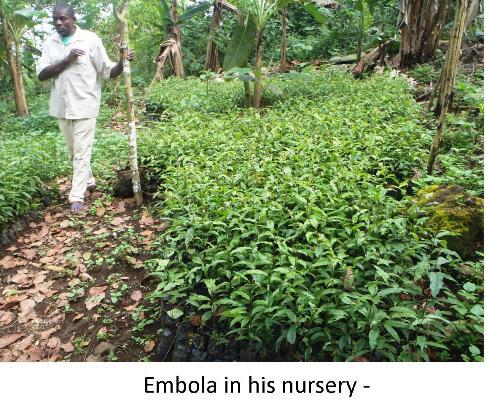 [/one_third]Many communities in the Mt. Cameroon area are catching on tree planting for financial benefits if not for environmental conservation. To help them improve the agroforestry business environment, ERuDeF with support from Fauna & Flora International and recently, The Mohammed bin Zayed, has been training villagers in nursery creation and management skills as well as seedlings collection.

Within last year, during seedling distribution in Bafia community in the Muyuka cluster, Ngombo Moses, after having grasped the economic importance of Prunus, decided to cut down 1.5 hectares of his cocoa farm to plant the species.

“Cocoa serves for short term returns. I need species like Prunus for the economic security of my children in the long run,” Ngombo says.

The VFMC (village forest management committee) manager of Bafia, Tabogo, who participated in onsite training workshops at the community nursery, was also able to establish his own nursery where he raised 500 seedlings of orange.

Through sensitization on the conservation status of Microberlinia bisulcata (Zingana), the CPS of Illoani and Munyenge on the western side of Mt. Cameroon, have implemented the skills nursery construction and management. They now have a nursery of Zingana seedlings as they want to try on their own to conserve the species.

The conservation of fragile ecosystems initiative was born when ERuDeF realized the need to safeguard the population of threatened trees in degraded landscapes of Cameroon, given that Cameroon is the richest in biodiversity in West and Central Africa yet has lost over 18.1% of its forest cover within a very short time due to unsustainable human activities.

The conservation project started in the Mt. Cameroon area in 2011 with the support of Fauna and Flora International (FFI) of the United Kingdom.

ERuDeF has also been collaborating with local government stakeholders including the Ministry of Forestry and Wildlife, the Mt. Cameroon National Park and the local communities to restore the last population of threatened trees with Zebra wood (Microberlinia bisulcata) being a flagship species of conservation priority.

The project conducts sensitization workshops with stakeholders, desktop research on threatened trees, forest inventory of threatened trees, seed collection, raising of seedlings at nurseries and outplanting them back in the wild through enrichment planting.

The project’s mission is to ensure that protected area management and local communities have skills, understanding and support to safeguard populations of globally threatened trees found in the Cameroon mountain areas and their surrounding forest reserves.

The major activities of the project include capacity building, law enforcement and enrichment planting. Since inception, the project has raised and transplanted about 25,000 seedlings of threatened trees into two Community Forests: Woteva and Bakingili, and distributed some (both threatened and economic species) to interested forest adjacent farmers of Bova I, Bova II Bonakanda, Woteva, Lysoka and Bafia to plant in their individual farms.