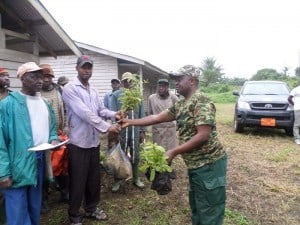 Just a few weeks after 10.000 threatened trees were planted in the Bakingili Community Forest in the Mt Cameroon area, 10000 more of the threatened trees have been planted out in another community forest in the area. Recently, Foresters working for the Program Conservation of Threatened Trees at ERuDeF in collaboration with local government authority and local communities planted these trees in the Woteva Community Forest created in 1994.

ERuDeF in collaboration with the Forestry Ministry has been working to replace some globally threatened species for some time now. For 3 years, the seedlings have been raised in nurseries and planting them out in the wild is to help restore huge populations of the trees lost to illegal logging. Some of the species planted out included the threatened Microbelinia bisulcata, prunus Africana, mahogany etc.

Speaking shortly after the planting exercise, the Chief of Woteva who doubles as Forest Manager, Chief Bernard Lieti Woloko said “I am very excited to have planted these trees and I wish such a program to continue because it is gearing towards regeneration and for the future generation. At this moment that the negative effects of climate change have become so glaring, the trees will help curb the effects” Chief Woloko said.

Another community member who also planted the trees, Simon Eseye said he feels happy because the trees planted are going to help restore the population of some species which have become so rare. “Before, we used to have Prunus Africana all over. But due to unsustainable harvest, they have become hard to find. We depend on such trees for our health, when we must have finished harvesting everything, what are we going to leave behind for our children” he bemoaned. He said after planting these trees, he feels consoled that he is leaving something behind for his children “I know these trees take long to grow, but I am consoled that when my children and grand children grow up, they will have something I left behind”.

Another community member who is a Forestry Technician, Ndumbe Stephen said planting the trees is a good lesson learned for conservation. “The trees will not just help protect our environment, but will also act as habitat for wildlife thus protecting them”. Ndumbe said. He equally explained that the trees planted are a legacy of the present generation “I am above sixty. I am not planting these trees for myself. It is a legacy of my generation for the next generation.

Speaking during the planting exercise in the forest, the Project Coordinate Asa’a Lemawah, said planting the trees back into the wild is a dream come true. “We started by nursing seeds of these threatened trees and for three years now we have been raising the seedlings, but to actually plant them back into the wild is a real achievement and I am so proud of it. This is because when the trees grow up, they will help boost the population once more” Ms. Asa’a used the opportunity to thank UK Charity Fauna and Flora International (FFI) and the Global Tree Campaign that has been supporting ERuDeF financially and technically towards the realization of this dream.