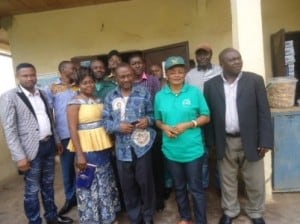 [/one_third]The new Divisional Delegate of Forestry and Wildlife for Lebialem, Ikome Delphine, has expressed her desire to unflinchingly collaborate with the Environment and Rural Development (ERuDeF) in saving species and biodiversity hotspots within the Lebialem Highlands Conservation Complex.

She was speaking, Monday July 10, 2017, to the ERuDeF team during a familiarity visit at ERuDeF’s Western Cameroon head office in Menji, Lebialem Division.

The Divisional Delegate said ERuDeF has already invested so much in her conservation strive within the Lebialem Highlands. She promised to follow the footprints of her predecessor, to facilitate ERuDeF’s conservation efforts.

“If I have any vibrant thing to do in Lebialem Division, it’s thanks to the many works ERuDeF has put in here in the Lebialem Highlands. I would work with the NGO to facilitate the conservation of wildlife species in the Tofala Hill Wildlife Sanctuary, and also facilitate the creation of the proposed Mak-Betchou wildlife sanctuary, among other things,” Delphine Ikome said.

The Delegate and her team reviewed ERuDeF’s activities in the Lebialem Highlands Conservation Complex, posing questions and recommendations on how things can be smoothly run in line with conservation.

With respect to the misunderstanding in the Lebang Fondom, in the creation of the proposed Mak-Betchou wildlife sanctuary, the delegate promised to contact the competent authority in Lebang, so issues are sorted out.

The Delegate recommended that ERuDeF hasten up processes of boundary demarcation for the Tofala Hill Wildlife Sanctuary. This to her, will avoid encroachment by villagers. She also recommended that eco guards and rangers be presented with state of the art equipment to facilitate surveillance around the Tofala wildlife sanctuary.

The meeting wrapped up with the delegate requesting that all ERuDeF report on activities conducted in Lebialem be submitted to MINFOF. This, according to her, will assist in enhancing follow-up and collaboration between her delegation and the organisation.