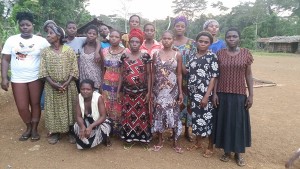 [/one_third]Two business models to cater for the enterprising needs of the Christian Philanthropic Farms and Missions Community Forest (CPFAM-CF), have been developed. The models developed recently in Ndian Division, Southwest Cameroon, covers four 4 villages under the CPFAM-CF. They include; Itali Batanga, Massaka, Epongi and Bombangi.

According to the business models, the communities chose to invest in the production and marketing of Njansa (Ricinodendron heulotii), and Bush Mango (Irvingia gaboneses). These products have been chosen because they are abundant in the forest and it’s a familiar activity within these communities.

[/one_half]According to the proposal, all households will be involved in the production of Njansa. Meanwhile, women will be responsible for the bush mango sector.

After all calculations were done, the community selected possible projects which they intend to carry out with the proceeds accrued from the above enterprise. Such projects included; constructing more classes for the lone primary school in Itali, hire PTA teachers, provide boreholes to 3 villages, construct a First-Aid Post and modern ovens for cocoa, protect identified water sources and donate pesticides to farmers.

[/one_half]At the end of the exercise, community members expressed their satisfaction for this wonderful opportunity which will enable their CF to be active. According to the Regent Chief of Itali, the exercise was eye opening and a symbol of hope for them. He said they will do all in their power to make this succeed once the models are financed.

The women’s leader was equally happy. She promised to rally the women of Itali and engage the other women leaders of the other villages to take the project seriously. She said the possibility of having a first aid post in the village will be a dream come true especially for woman and children.

The models developed recently, serves as a condition sine qua non to obtaining funding for the Dryad project. According to the guiding principles of the Dryad project, business models should be profitable, sustainable with social, economic and environmental benefits on communities.

It is within this framework that the management and community members of the CF developed business proposals on the production and sales of bush mango and njansa on a large scale.