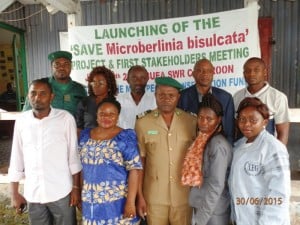 [/one_third]ERuDeF under its Conservation of Threatened Trees Programme, June 30, 2015, launched a new project to save over 80% of the world’s fruiting Microberlinia bisulcata (Zingana) treesin the Mokoko River Forest Reserve in Fako Division, Southwest Region of Cameroon. A logging company, SEPFCO, is exploiting timber in this area.

In a meeting held with officials of the Southwest Delegation of the Ministry of Forestry and Wildlife (MINFOF) and those of ERuDeF at ERuDeF headquarters in Buea, the Project Coordinator, Limbi Blessing Tata, said the project aims to support the Microberlinia bisulcata seed bank by conserving mature and fruiting trees of the species at the Mokoko Forest Reserve. The project is funded by the Mohammed bin Zayed Species Conservation Fund.

According to Limbi, the Mokoko Forest Reserve is the most reliable seed bank for the species for now, as such ERuDeF wants to work with MINFOF and other stakeholders to ensure that the seed bank serves its purpose for as long as it is necessary.

“We would work with MINFOF to ensure the implementation of laws governing the exploitation of timber. ERuDeF is ready to collaborate with SEPFCO, the Chief of Forestry Post Illoani and the various Village Forest Management Committees (VFMCs) amongst other stakeholders around the Mokoko Forest Reserve,” said Limbi.

She added, “We would also supply SEPFCO with seedlings of the species for reforestation of logged areas.”

ERuDeF’s Acting Director, Messape Derrick, representing the President/CEO at the meeting, affirmed that the effective conservation of fruitingMicroberlinia in the Mokoko forest area can only be achieved if ERuDeF, the MINFOF Brigade team and the other stakeholders work together with the SEPFCO logging company.

Biakiay Norbert, Controller No 1 at Southwest MINFOF Brigade, stated that while the South West Regional Delegation of Forestry is ready to take local measures to conserve the species, the project team should do thorough ground work in order to convince hierarchy to place a ban on the commercial logging of Microberlinia.

Other stakeholders that need to be included in the new project to conserve the Microberlinia seed bank include user groups of Zingana, village authorities, small holder farmers and the Cameroon Development Corporation (CDC) which is said to be expanding its farms in the area.

Stakeholders’ meeting in sessionBiakiay also suggested the use of the Mt. Cameroon Technical Operation Unit (TOU) as a platform for collaboration between ERuDeF and SEPFCO. He said it will be helpful to work with the SEPFCO prospector who should have some GPS way points, but, since the Forest Management Unit in the SEPFCO concession is not certified, ERuDeF GPS technicians would become more useful.

Biakiay identified some elements of the law to be enforced to include: the law protecting trees along water courses, other fragile ecological zones like swamps, steep slopes, respect of exploitable diameter of trees (Zingana is minimum of 80 cm), seed carriers, corporate social responsibility (CSR) and areas not covered by SEPFCO such as communal land.

The MINFOF official also said domestic permits could be restricted in certain areas, while the communities could be sensitized to stop further encroachment into the forest reserve.

After serious brainstorming, the stakeholders resolved that in order to ensure the effective realization of the project, the VFMCs will be empowered to carry out patrols in the area. Responding to this, the Chief of Forestry Post Illoani, Osang Johnson, said that most of the VFMCs in the area were already very organized. He, however, pointed out that the communities need to be sensitized more on the stakes of Zingana.

The team stressed the need for ERuDeF to work with the Regional Delegate of Forestry and Wildlife to address a letter to the Ministry proposing a legal ban on Microberlinia bisulcata. Meanwhile, the Chief of Post for Illoani, in geo-referencing Microbernia trees during inventories, could exempt Zingana from domestic permits as much as possible.

The Brigade team recommended that in order to reduce cost, tagging of trees to be exempted from exploitation should be done following SEPFCO’s inventory. They also advised that a community forest be created in the area, adding that if all stakeholders on board collaborate, further encroachment into the Mokoko Forest Reserve could be stopped through the use of the ‘Taungya system’.

The MINFOF Brigade was also exhorted to study SEPFCO’s ‘cahier de charge’ to ensure the respect of corporate social responsibility norms in the exploitation of the forest area as this would trigger community interest in the project.

Earlier on June 18, 2015 a meeting had been held to discuss possibilities of attaching a research component to the project with the aim of collecting enough data to convince the authorities to ban the exploitation of the species.