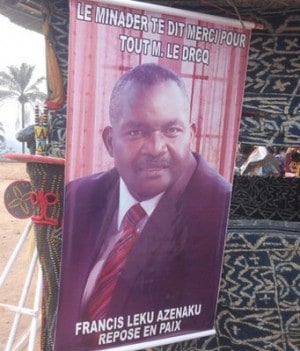 [/one_third]It was a lamentation Saturday March 4, 2017, when the Environment and Rural Development (ERuDeF) family, flanged by a cross section of mourners and well-wishers thronged Babong-Bamumbu Village, Wabane, Lebialem Division of the Southwest Region, to pay last homage to the Organisation’s Vice President, Leku Francis Azenaku.

The massively attended funeral ceremony brought Babong-Bamumbu to a literal halt with all routes leading to the deceased compound. Also in attendance, was a high level delegation from the Ministry of Agriculture and Rural Development, headed by Minister Henri Eyebe Ayissi.

The ERuDeF delegation headed by the Senior Director of Administration and Human Resources, Charles Tangie, and Director of Programmes and Planning, George Nkemka, paid their last respect to the deceased with condolence messages to the mourning family.

Speaking on behalf of ERuDeF to the family of late Francis Leku, delegation head, Charles Tangie said the deceased was an active and lucrative member of ERuDeF until his death. According to him, serving an organisation for over seventeen years since its creation as Vice President, late Francis Leku, contributed enormously to the growth of ERuDeF.

He apologised for the unavoidable absence of ERuDeF President and Chief Executive Officer, Louis Nkembi, and Chairperson of Board of Directors, Akemka Eric. Some gift donations in cash and kind, were handed the family of Menkemakeu on behalf of ERuDeF by the delegation. 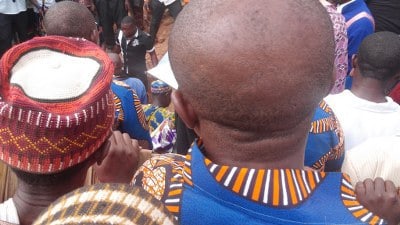 [/one_half]Besides ERuDeF, Late Francis Leku served as Director of Regulations and Quality Control (DRCQ) in the Ministry of Agriculture and Rural Development (MINADER), a position he held until death.

Speaking on behalf of the Ministry, the Secretary General, Mr Mvondo Na’a Patrick, said the death of Francis Leku came as a shock to the MINADER family, as he was very active even to the point of death. He described the deceased as being an exceptional staff and collaborator. Competent, productive, and result oriented. Another collaborator, Doh Bertha Bakata, Special Adviser at the Prime Minister’s Office, said the late Francis Leku was an asset to the Southwest Region. She said the deceased played a pivotal role in the socioeconomic development of the Bakassi Peninsula, especially in the field of Agriculture.

Late Francis Leku who died at the age of 48, held a Bachelor’s Degree in Agricultural Engineering, and Masters in Water Resources Management. Besides his professional career, the deceased held a top most recognised title in his village. He was popularly known to his people as His Royal Highness, Chief Fossung. He leaves behind a wife, Irene Leku Akem, and five children.