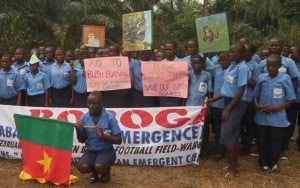 Slash-and-burn farming system, indiscriminate felling of trees and hunting, and other activities that further jeopardise the existence of endangered wildlife species, especially the Cross River Gorilla and Nigerian-Cameroon Chimpanzee are some of the poor environmental practices the youths advocate strongly that their communities stop.

The youths made their voices heard during the ERuDeF annual Wildlife Advocacy Week (WAW), February 11 – 15, 2015 in Lower Wabane, Lebialem Division under the auspices of the NGO’s Education for Sustainable Development (ESD) Programme.

Launched in Nkong during celebrations marking the 49th National Youth Day, the young environmentalists marched pass the grandstand with green cards for a green environment.

They also brandished placards bearing unique conservation messages like “No to Illicit Hunting; Protect the Cross River Gorilla”, “Plant More Trees, Save Our Water Sources”, “No to Bush Burning, Keep the Environment Green” “No to Deforestation, Save the Great Apes and their Habitats” and others.

They also displayed paintings of the Nigeria-Cameroon Chimpanzee and the Cross River Gorilla, which they want protected.

Corroborating these young conservation ambassadors, ERuDeF ESD Coordinator, Akeh Nug, congratulated the communities on their collaboration and assistance in the gazetting of Tofala Hill Wildlife Sanctuary.

She reiterated the need for a collective efforts in protecting critically endangered great apes and fighting illicit hunting of threatened species most especially the Cross River Gorilla and the Nigeria-Cameroon Chimpanzee.

To better depict the conservation messages, the ERuDeF education team set up an exhibition stand, decorated all green for a green planet, with posters of some protected wildlife species erected for the people to familiarize themselves with.

After the launch in Nkong, the ERuDeF ESD team organised biodiversity conservation sensitization seminars/workshops in Nkong, Besali and Bechati to better equip these conservation ambassadors as they mobilise to start educating their communities on conservation importance.

The ERuDeF ESD team taught these young conservationists the ecology, nutrition, physiology and behavioural pattern of various apes/endangered wildlife species found in Tofala and the importance of conserving these wildlife and their habitats. They had constructive interaction with these students/pupils on the implications of conserving the country’s wildlife species and biodiversities and the adverse effect of the slash-and-burn system of farming practiced in this area.

At the end of the week-long campaign, the ERuDeF conservation ambassadors moved round their communities putting up posters of endangered animal species they want protected.

They promised to transmit conservation messages to their parents.

Achunkeng Nadesh of GSS Nkong said she would tell her parents that, “it is not good to burn the farm or cut down trees before you cultivate and hunting endangered animals too is against the law.”

Tabu Micheal Zah of GTC Bechati, Alida Marceline of GHS Besali and Forteh Doglass of GBPS Nju-Nkong, all promised to move round the villages with conservation messages.

“I am really impressed by ERuDeF’s conservation activities in this area and they are always welcome. I think we are together with ERuDeF in the conservation of special species like the gorillas and the chimpanzees,” Fon Eyong said.

The Chief of Besali, Ekwe Tayem Robert, said “the idea of a wildlife advocacy week was well conceived to target the young people. Conservation activities have a future in this area because the young people will be leading the village tomorrow.”

The Head Teacher of GS Banti, Sylvester Zah, said the schoolchildren are the best to transmit conservation messages to the villagers because the villagers would believe more in them.