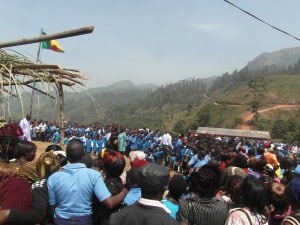 Some Tofala Forest adjacent villages like Fossimondi, M’mockbie, and Nwangong, who before put up stunt resistance against the gazetting of the Proposed Tofala Hill Wildlife Sanctuary (PTHWS) have declared profound support to ERuDeF in the gazetting of this biodiversity hot spot in the Lebialem Highlands.

After constant sensitization campaigns and meetings with elites, notables and chiefs of these villages, the people who saw the gazetting of Tofala as ERuDeF’s attempt to “take away” their “God-given forest and animals”, declared their unequivocal support to the gazetting process during week-long activities to mark the ERuDeF 2014 Wildlife Advocacy Week.

“Gazetting the Tofala Rainforest is a very good idea. The area is rich in wildlife; both plants and animals and will bring in tourists into our communities. It is true that we opposed this; thinking that ERuDeF was coming to take away our forest, which was not the case! We have now understood everything and the importance of wildlife conservation. In my village, we are in favour of complete protection of this forest and its content”. Manasseh Jong, a Folepi Village Elite said.

Mr Jong lauded ERuDeF’s approach to conservation that is setting up environmental clubs in schools and educating pupils/students and by extension the communities on the need to effectively take care of their area “which is very hilly and prone to natural disasters”.

In the same vein, a M’mockmbie Village Notable, Mr. Charles Nde Nkemcha congratulated ERuDeF on its relentless effort to protect their forest and natural resources amidst incessant resistance. He said it is thanks to ERuDeF steadfastness that they have come to understand the importance of conserving their natural resources for posterity. “We have realized that if we kill all these animals, our children growing up will not be able to see them” Mr. Nkemcha like many others confessed.

Another notable from M’mockmbie, Mr. Ndi Nkemcha Lefie corroborated this promising to be ERuDeF’s conservation ambassador in his village area; “We are happy for the continuous efforts and advice ERuDeF has been giving us to take care of these animals in our forests. We the notables of M’mockbine fondom will go back to our village and educate our people on the need to protect these animals”.

Affirming to conservation messages from ERuDeF, other village notables and elites like Francis Tetang, Clifford Zabze of Fossimondi, and Pa. Simon Nkemnkem of Nwangong, regretted the disappearance of certain animal species from their communities as a result of indiscriminate hunting.

“What ERuDeF is saying is true…there are some very important animals that we use to have in this area (I cannot really remember how we use to call them) that we no longer see today because of too much hunting. Even the gorillas, Chimpanzees, monkeys, which we still have, only hunters and those who go deep into the forest can see them. Our plea to our people is that we allow the gorillas, Chimpanzees and other wildlife species to grow and create their own families and our children and great grand children can grow and see these animals” Francis Tetang and other villagers stressed.

Drawing inspiration from anthropogenic activities in the Tofala forest like hunting, farming and deforestation, a M’mockmbie resident, Teracesius Nkengafack, suggested that granting Tofala the status of a protected area and providing other means of sustenance to the hunters is the only way to fully guaranteed the safety of endangered wildlife species in this forest.