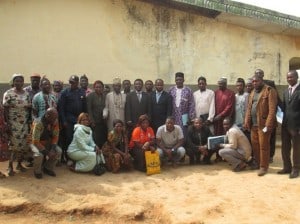 [/one_third]The inhabitants of Lewoh community, Lebialem Division, Southwest Cameroon have expressed gratitude to ERUDeF and partners for opening their eyes to the benefits of genetic resources exploitation to their community.

They were speaking at the end of the launch of the ABS-Mondia project by ERuDeF under the auspices of the Southwest Regional Delegate of the Ministry of Environment, Protection of Nature and Sustainable Development (MINEPDED).

The Deputy Mayor of Alou just like the traditional ruler, cried foul at other individuals and organizations who exploited genetic resources without attributing any benefit to the local community.

“Before now companies and individuals exploited genetic resources from our communities without our consent talk less of any related benefits but the ABS Process is different because we are sure to benefit a lot from the exploitation of the Mondia roots in this municipality,” said the First Deputy Mayor of Alou Council.

Corroborating this, Lewoh Fon’s representative to the launch said, “This project will produce additional revenue for families and act as another source of income for the people of Lewoh.”

He implored his people to act as ambassadors of the project.

The CEO/President of ERuDeF, Louis Nkembi, while opening the launching ceremony explained that the project is divided in two phases; the Research and Development (R&D) and the commercialisation phase.

The R&D phase involves conducting laboratory tests on the roots and regeneration of the resource within Lewoh, whereas the commercialisation phase entails sales of the dried roots to the company following agreements between the community and the company.

In the same light, MINEPDED Regional Delegate, Set Ekwadi Songue, advised farmers not to quit other farming activities but to integrate the cultivation of Mondia in their farms especially beneath trees and around fences since Mondia is a vine.

This new ABS project will add value to the roots of the Mondia plant for cosmetic purposes through the intervention of V. Mane Fils Company in France using the ABS process, which ensures the equitable distribution of benefits accrued from the exploitation of biological resources between the company and the community who are custodians of these resources.