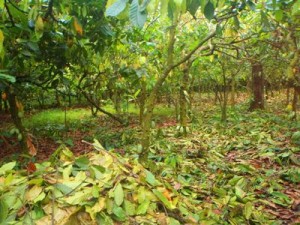 The creation of nature reserves in Cameroon dates back to the colonial era. The Southern Bakundu Forest Reserve was created in 1939 as a native administrative forest reserve and approved following decree No. 22 of 25 April 1940 by the British Colonial Government. The forest reserve was created as private state property and classified as a forest from which seedlings of rare and endangered plant species could be collected and planted elsewhere. The Southern Bakundu forest is located in the South West Region of Cameroon. It is located in the West of the road, about 75km from Limbe to Kumba the principal town of Meme Division and occupies a total area of 194.25km. This reserve like many other reserves and protected areas in the country was created mainly to protect certain floral and faunal species from extinction due to the high rates of deforestation and encroachment. The reserve consisted of distinctive flora and fauna with many endemic species such as the Microberlinia bisulcata (Tiger wood), Lophira alata (Iron wood), Nauclea diderichii (Opepe), Gebourtia mannii (Boubinga), Milicia excels (Iroko). A few years back during a field visit by ERuDeF’s Mt Cameroon threatened trees project team, the reserve had some threatened trees within. It was pathetic to realize that going there again this March 2014, vast estates of cocoa and palm plantations now exist instead of forest within the supposed reserve. One could wonder if it were a cocoa reserve or a forest reserve. Nonetheless, one could assume that when these reserves were created, land tenure systems in and around the protected areas were not well articulated. Could it be said that little consideration was made to the communities around the reserves as at the time when allocating the area for a reserve? Or could it be that these communities around the reserve may not really know the exact boundaries of the reserve or buffer zone around the protected area? Whatever the case may be, the rate of encroachment into these protected areas could be attributed to insufficient land to sustain the livelihood needs of the growing population for cash and food cropland, timber and wood for sale, firewood for local use, wildlife, medicinal plants and other non-timber forest products. Our once rich and bountiful heritage of Southern Bakundu Forest reserve amongst many others are gradually becoming vast plantation estates.

By Ebong Lionel. Edited by Shuimo Trust The Cross River gorilla (Gorilla gorilla diehli) is the northern and western-most gorilla subspecies and is restricted to the hilly rain-forest region along the Nigeria-Cameroon border, which forms the headwaters of the...