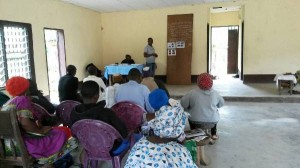 Thirty three (33) individuals representing the Village Forest Management Committees (VFMCs) of some communities bordered to the Tofala Hill Wildlife Sanctuary (THWS), have received training on basic wildlife laws and the use of GPS. The training took place recently in Bechati, headquarters to the sanctuary.

The one day training was on the basic elements of the 1994 Forestry and Wildlife laws. Pictures were used to demonstrate the different species protected, and the use of GPS to collect coordinates, as well as tracing of the boundaries of a protected area. The training was facilitated by a Senior Wildlife Biologist at the Environment and Rural Foundation (ERuDeF), Allen Tabi.

Regarding the 1994 Forestry and Wildlife Law, the facilitator told participants that animal species are protected under three classes, A, B and C. According to him, species of class ‘A’are totally protected and may on no occasion be killed except as provided for by the law.

“For example Cross River Gorilla and Nigeria Cameroon chimpanzee are totally protected. However, their capture or their being kept in captivity shall be subject to the grant of an authorisation by the service in charge of wildlife,” Allen added.

He indicated that the species of class B are also protected, however, they can be hunted, captured or killed, provided a hunting permit is granted.

“For example, blue duiker (frotambo), brown duiker (deer) are protected. Like I explained, the can still be hunted, that is if a hunting permit is granted by the Ministry of Forestry and Wildlife (MINFOF),” Allen explained.

He went further to saythe species of class C are partially protected, example porcupines, cane rats. According to him, their capture or killingsare regulated by conditions laid down by theMINFOF law.

At the end of the training, the facilitator indicated the exercise will go a long way to raise awareness on the different animal species protected by the Government of Cameroon and the penalties involved in hunting them.

Participants testified they grabbed a lot from the training. They promised to pass on what they learned to their community members.

“Such training are very important for the local populations because they are ignorant of the different species that are protected by the Government. We, members of the Village Forest Management Committee, will ensure that those we represent will also benefit from the knowledge that we have acquired. Tofala Hill Wildlife Sanctuary is our jewellery, so we should make sure we contribute in the protection of its species for the present and future generations,” opined Fon Nkemtaji Jerry of Bechati VFMC.