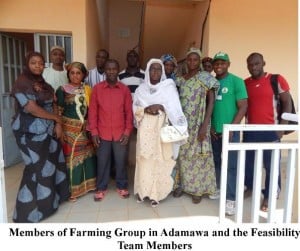 [/one_third]Some farming groups in the Banyo, Tibati and Ngaoundal subdivisions in the Adamawa Region of Cameroon have said they are “impatiently waiting” for the extension of Trees Cameroon Agroforestry Systems to their region.

This expression was made during a survey/feasibility study trip made recently by the Trees Cameroon Team to the region.

The Sub Divisional Delegates and different farming groups were enlightened on the importance of this project in their region.

“With the rapid conversion of forest to agricultural land and urban development in this area, there is need forthe introduction of the Agroforestry System of Farming” the Trees Cameroon Team said.

Representing the Banyo Sub Divisional Delegate of Agriculture, Mr. Dewa, who is the Chief of Post for Agriculture in Banyo, said he is very excited that his Sub Division will also soon be part of the project.

“We are impatiently for the start of this project” he added. The same form of excitement was expressed in Tibati and Ngaoundal.

The Sub Divisional Delegate of Tibati, just like some of the farming groups, was sceptical about the possibility of initiating the project by 2017 as indicated by the Trees Cameroon Team. This fear disappeared when he learnt that the project was already running successfully in the Northwest, Southwest, West and Littoral Regions of Cameroon.

The Sub Divisional Delegates and farming groups alike hoped that the project “will not start today and disappear tomorrow” as has been the case with most NGO projects in the Region.

Trees Cameroon with the support of Trees for the Future, USA, was introduced in Cameroon in 2011 and has imparted over 1000 households in the North West, South West, West and Littoral Regions. Through the planting of soil improvement agroforestry species as well as economic trees, farmers in these regions have witnessed an increase in their yields and nutritional resilience.

With rapid increase in forest destruction by the Muslim population of the Adamawa Region in search for land for agriculture and urban development, the extension of Trees Cameroon’s Forest Garden Program and other Agroforestry Systems becomes very crucial