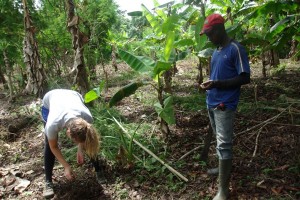 The decision of Trees for the Future to set up these plantations this year stemmed from the fact that in 2013, the Cameroon Program distributed seeds of the Moringa oleifera to all its farmers and nine months after, a lot of farmers began testifying the benefits of the plant to their health. The farmers even nick-named the species ‘magic stick,’ given that the species helped cure almost all ailments suffered by farmers. This prompted some research work on the medicinal properties of the species by the senior team at Trees for The Future Cameroon who noted that the species was very rich in nutrients and so it helped to boost the immune systems of its consumers and thus help them to fight infections.

At the beginning of 2014, the demand for Moringa seeds of from TREES farmers was so high. Akama Sona a farmer based in Ikiliwindi, Meme Division, South West Region asked for 10kg of Moringa seeds. ‘I want to send the seeds to all my relatives in Cameroon and beyond. Moringa tea and powder have significantly reduced the money that I spend on drugs’. He recounted. ‘Moringa also has a good market especially in Yaounde. In Yaounde a 2g pack of Moringa powder sells at 500FCFA($1) and a 30cm long seedling is sold at 1000FCFA($2)’ He continued.

It should be noted that these new plantations set up will also serve as a source of income to the farmers as they are expected to work in close collaboration with the Agribusiness Peace Corps Volunteer, Ms. Laureen Jessup to come up with business plans for the marketing of Moringa products. Whereas TREES Cameroon will have the seeds to distribute to their farmers, the farmers taking care of the plantations will have good nutrient supplements for their families and will be able to sell the leaves as Moringa tea, Moringa powder etc. Moringa oleifera might turn out to really be a ‘magic plant’ after all.