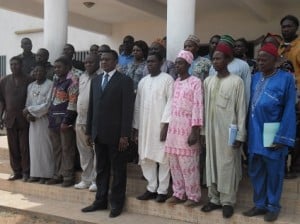 Fons from some nine villages surrounding the proposed Tofala Hill Wildlife Sanctuary in the Lebialem Division have resolved to maintain the name of the sanctuary and have renewed their commitment in supporting government policies on the conservation of biodiversity in Cameroon in general and Lebialem in particular. The Fons who came from Bechati, Nkong, Folepi, Egumbo, Banti, Bamumbu, Fossungu and Bangang made this resolution on January 14, 2014 in a meeting in Menji under the watchful eyes of the Senior Divisional Officer for Lebialem, Kouemo Simon.

The Green Vision learnt the Fons had initially disagreed on what name the sanctuary should be called. However after a series of consultations coordinated by ERuDeF who is technically assisting the government in the creation of the sanctuary, the Fons decided to shove away their differences and resolved that the name of the proposed sanctuary should be maintained as “Tofala Hill Wildlife Sanctuary”.

The Fons of Besali, Bechati, Nkong and Bamumbu reiterated that their years of resistance are over and they are now more committed than ever before towards supporting these government efforts to conserve the biodiversity of the area and that they are fully behind ERuDeF.

During the meeting, stakeholders reviewed the local community economic development initiatives the Environment and Rural Development Foundation (ERuDeF) has brought to the Lebialem Division in general and the proposed Sanctuary area in particular.

In order to ensure that the villages surrounding the proposed Tofala Wildlife Hill Sanctuary are not left out in the implementation of the proposed protected area, ERuDeF has constructed four semi industrial palm oil mills between 2011-2013 in four villages to improve on livelihoods. These oil mills have helped to increase local palm oil production by 45-50% on average. The NGO has also produced and donated over 250 modern beehives since 2010 to enhance honey production and improve living conditions of the villages around the proposed sanctuary.250 piglets have also been donated to villages around the proposed Tofala Hill Wildlife Sanctuary between 2010-2013 including, Banti, Egumbo, Bangang, Folepi, Mmockmbie, Nkong to name these. The organisation has equally set up a micro funding institution to help finance environmentally friendly community initiated projects in the area. Over 8 million frs cfa has been given to support community businesses. ERuDeF has also set up an agroforestry project with the aim of improving soil health and improving productivity. Environmental education sessions have also been held in primary and nursery schools of the area to help build next generation of conservation leaders.

In summary, the organisation has spent over 95 million CFA in supporting community development in the villages surrounding the proposed Tofala Hill Wildlife Sanctuary in Lebialem Division.