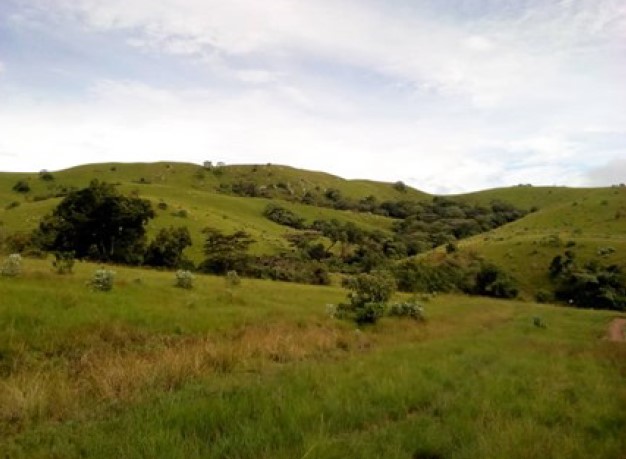 The Adamawa Plateau named after Modibbo Adama, the founder of a Fulani emirate, is 1100m in altitude. There are also clearly defined mountains with summits over 1800m, the most elevated being occupied by the grassland vegetation (Sporobolus africanus) much grazed by herds of the Mbororo. It’s highest elevation peaks over 2650 meters. The vegetation of Adamawa Plateau is made up mostly of savannah and some part of montane forest. The plateau is the source of almost all water basins in the Cameroon, such as the Benue River, River Sanaga, Logone River, Djerem, and the Lom river. This plateau has key biodiversity hotspots such as Tchabal Mbabo Mountains. Tchabal Mbabo Mountains range on the western border of the Adamoua Plateau is the highest peak on Adamawa Plateau.

The Tchabal Mbabo Mountains represent the last segment in the chain of mountains known as the Cameroon Volcanic Line, which extends northeasterly from the island of Bioko continuing inland with Mt. Cameroon, Mt. Kupe, the Manengouba Mountains, Mt. Lefo and Mt. Oku. Tchabal Mbabo is a broad horseshoe-shaped mountain massif with a west-eastern orientation and altitudes of up to 2,400 m. Above 1,600 m covers 79,000 ha with 4,900 ha of relict montane forest along the steep northern slopes, adjacent to the rim which represents the northernmost occurrence of this forest type in Cameroon. The montane ecosystem is the most botanically rare and the most interesting ecosystem on the Tchabal Mbabo Mountains.

A survey by Matt Walters University of Canterbury, NZ 2004 identified ten IUCN globally threatened montane plant species on Tchabal Mbabo. Locally these forests are crucial for maintaining a year round water supply for local communities and are the headwaters of several major rivers. They are also habitat for wildlife. The montane-savannah ecosystems of Tchabal Mbabo are globally recognized for their conservation importance due to their richness in birds (Tchabal Mbabo was designated by Birdlife International as an Important Bird Area (IBA) harbouring more than 86 species of birds. six of these bird species are endemic to montane areas of western Cameroon and Nigeria), reptiles, amphibians and large mammals. The mammalian species include large predators such as the near threatened African  golden cat (Felis aurata), leopard (Panthera pardus) and spotted hyena (Crocuta crocuta). Following biological reconnaissance surveys conducted by a team of Cameroon Wildlife Conservation Society scientists (CWCS), the African wild dog (Lycaon pictus) reported extinct in the area by IUCN was recently confirmed by local hunters to still be present. However, a total of 30 herpetological species (one caecilian, 14 anurans, nine lizard and six snake species) are recorded from the Tchabal Mbabo Mountains. In this light, thoroughly surveyed savanna forest areas in West Africa suggest amphibian species counts of at least twice of those present here. Efforts to preserve the unique montane forests on the northern slopes as well as the semi-deciduous and gallery forests are warranted to ensure their welfare in the future.

The montane forests on the north-facing slopes are relatively secure due to their extreme topography. The gallery forests on the southern slopes however, are accessible to the Fulani cattle and are increasingly degraded by husbandry practices. Threats to the vegetation of Tchabal Mbabo come from the local Fulbe in terms of overgrazing, burning and wood collection. Particular species which are exploited include the timber trees (Hallea stipulosa), and Prunus africana. The latter is commercially valuable for its medicinal purposes as the bark contains a complex of compounds used in the treatment of prostate cancer. Trees are completely stripped off their bark and consequently die. Though rich in biodiversity, no major conservation work has been carried out in Tchabal Mbabo.

Recommendations for conservation and management support the idea of creating a National Park incorporating the whole of Tchabal  Mbabo  with  different management  zones:

1) Total protection of the forest, that is escarpment forests and some areas of the plateau with representative types of stream fringing forests

2) Rural development on the plateau with the introduction of alternative grazing and wood Sources or the reintroduction of floristic diversity. Eucalyptus species have proved very effective on neighboring Mambilla Plateau in Nigeria, but fast growing native species such as Croton macrostachyus and Hallea stipulosa could be trialed.

3) Rural development on the Dodeo plain with a wide buffer zone between it and the bottom of the escarpment forests.

The Environment and Rural Development Foundation(ERuDeF) with over 20yrs experience in conservation activities, restoration of fragile ecosystems, will be contributing to the conservation of Tchabal Mbabo Mountains in the Adamawa Plateau. ERuDeF will equally be planting over 10 million trees in the degraded Adamawa plateau to restore its ecosystem functions. The project doped Tchabal Mabo Mountains-Ghasaka Ngumti trans-frontier project would help create the Tchabal Mabo Mountains National Park and a series of community forests. The project will also collaborate with the neighboring Ghasaka Ngumti National Park in Nigeria to create a transfrontier programme to support the conservation of elephants, baboons, chimpanzees, large cats in the conservation areas.