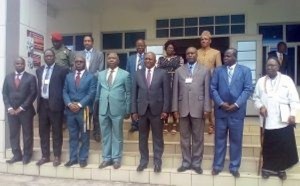 [/one_third]A work-plan for the development of a Participative Integrated Ecosystem Services Management Plan for Bakassi Post Conflict Ecosystem (PINESMAP-BPCE) has been established. Stakeholders drawn from the Cameroon Government, local collectivities and international partners, established the roadmap recently during a three day workshop that took place in Buea, Southwest Cameroon.

The workshop was geared towards providing a working mechanism to be implemented within the Bakassi Peninsula as well as develop an annual plan for 2018.

According to representative of United Nations Environmental Program (UNEP), Adamou Buhari, the implementation takes into considerations all actors not leaving the local communities and all those who have a vital role in the implementation of the project.

“The project will include all the related activities such as environment, socioeconomic and other aspects which will be identified and the key actions to be prioritised, without leaving out the local communities and all stakeholders involved in the implementation of the project,” AdamouBuhari stated.

This four year project funded by the Global Environment Facility (GEF) seeks to ensure the conservation, sustainable use and improved management of the Bakassi Peninsula through integrated ecosystem management plans including assessment of the ecosystems.

According to the Project Coordinator, NgendohZedeka, mangrove is said to occupy 30% of Cameroon’s coastline and just like any other in the world, mangrove in Cameroon is subject to threat such as economic pressure, agro industrial expansion, artisanal logging, unsustainable fish harvesting, urban expansion and a host of others.

He further indicated that the Bakassi peninsula has undergone severe degradation due to the aforementioned human activities which have damaged the mangrove ecosystem.

With this in mind, it is expected that this project will address the degradation of the ecosystem and habitat lost caused by these human activities.

Municipal authorities present during this occasion, greeted this project with lots of relief

“I think this exercise will uplift the abandoned or relegated Bakassi area. It encourages the people that the government and the world has not forgotten them. I also feel that this project is going to improve my area. Destruction of mangroves which reduces water and other aquatic resources will be stopped. We will rather conserve the mangroves so that we can also conserve and have more aquatic products,” said Cornelius Edude, Mayor of Kombo Itindi.

Meantime, the Environment and Rural Development Foundation (ERuDeF), will join forces with five other NGOs to effect the conservation of the Bakassi Mangrove ecosystem. Speaking shortly after the meeting, the Chief Operating Officer of ERuDeF, Nkeng Ursula said the project shall take embark on an inclusive and a holistic approach. That according to her, will have men, women, and youths, adjacent to the earmarked areas, be implicated at all levels of the project

The project cuts across the Bakassi Peninsula: Isangele, Kombo Abedimo, Kombo Itindi, Idiabato and Bamuso. It will be implemented under the supervision of GEF in close collaboration with the Cameroon government and six other implementing partners.

Its budget is set be at close to $13 million (CFA6.5M) to cater for institutional and stakeholder capacity building, Participative and inclusive development and implementation of the integrated ecosystem management plan and knowledge management, monitoring and evaluation.